I spent 20 years hoping that I was setting a good example for my children by being a bike commuter.

Be careful what you wish for. 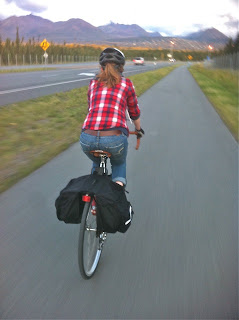 My daughter has a job and takes classes at several locations, so my wife and I have made sure she has a reliable, fuel-efficient car. But she routinely leaves it in the driveway and pedals one of her three bikes to work and school. I think that's awesome. Like me, she likes exercise and hates putting gas in a vehicle.

But being the father of a young woman can really test a guy’s commitment to bike commuting. A strange mix of pride and fear flow through me when she talks about riding home at night because, while I love having a kid who would rather turn bike pedals than mash a gas pedal, I know women face extra and unfair dangers. And that pisses me off.

I want my daughter to live a life free of unreasonable fear. I don’t want to be a “helicopter" parent who smothers his kid by being overprotective. So I’m trying to find ways to make it all work.

With darkness falling earlier every day, I’m rearranging my plans when I can, to ensure that I can meet her after class. We get to share the ride home together, and I can rest a little easier knowing she’s not alone.

Cool how your daughter picks the two wheels over the four!! I hope mine make that choice when their older!!

Having 3 girls myself, your thoughts are not sick, as to what you'd do to the sick bastards out there in our world; if they choose to mess with our blood!!
Our thoughts are on the same level I'm sure!!
You might as well put me in jail, if anyone messes with my girl's!!!

Amen brother. My daughter just turned 13, so it is only beginning for me, but I share your bitterness with this ugly aspect of the real world.

some basic karate training and a can of bear spray (for the "bears," even in mid winter...)can ease a dad's mind, too

That's awesome how your daughter goes for two wheels over the smog box. You sure did something right.

There's a lame sounding, old book called "Waking the Tiger within" (told you it sounds lame), but it's got some very good self defense tips, especially for women. Skim the text, but the pictures are instructive. Can be downloaded from http://library.nu or maybe at your local library.

Awareness is half the battle, keep an eye out for the lowlifes and you might be able to avoid a nasty situation in the first place. Prevention is better than cure. Failing that, check if Alaska has carry concealed laws!

Speaking from personal experience, sometimes it's the men who are closest to you and whom you thought you could trust that are often far more dangerous than the strangers you meet on the bike path. But in any case, a strong sense of self-awareness and some year-round bear spray are effective in both cases.

Ever hear Charlie Daniel's song "Simple Man". Those are somewhat the same sentiments I have for dealing with those that would do anything to harm la famiglia

You are a good dad!

Bear spray is always nice to have, but also when I see a shady looking man on the Chester Creek Trail (this happens every day, btw) I make sure to look him in the eye and say "Hi". That way he knows that I'm not the one he wants to mess with. Studies show that men like that prey on the weak. If you look away, you're more likely to get attacked.

Wow! Your post brought tears to my eyes. I have a daughter, a senior away in college. I can relate. Also, as a woman I have to worry about myself, more when the sun goes down.

Agree w/other comments. Being aware and assertive go a long way. Also having a game plan. Having commuted for years at night, I've sometimes imagined myself blinding someone w/my headlight or assaulting them with my bike (or both).

As Julie said, looking at & acknowledging other trail users tells them you notice them. But most violence against women is not from strangers, it's from people they're dating (or formerly dating) or otherwise trust. And that really sucks.

That said, Hannah's a smart, confident young woman. You & Jacque have raised an awesome daughter.

Always good to see attention paid to violence against women. Maybe men who care about this could start trying to change the behavior of other men?

Men: how many lewd comments have you put up with from your friends, as long as they weren't directed at women you actually know? A little peer disapproval can go a long way. This goes for men who abuse their dates and partners, as well, since as others have pointed out, that's a big part of the problem. If you see your buddies doing this, make sure they know it's not okay with you.

Great observations, and you are right to take precautions. The best way to be a woman in the world is not to be afraid but to always take precautions, not finding oneself alone is a great one. I hate that the world works this way and I do find it limiting, but then, I have not been accosted, either. I am 55 and even last week a carload of boys drove by with one yelling "Bitch!" out the window at me. This was a half-mile from my house...walking with my burly husband! Ugh. We just have to be smart about where we put ourselves...keep up with the awareness.