I’ve gotta tell ya, it’s been feeling lately like fat bikes have jumped the shark. They’re selling like crazy, but there are only so many hardcore winter riders. I have to wonder if a big-tire bike hasn’t become just a status symbol for many new owners. 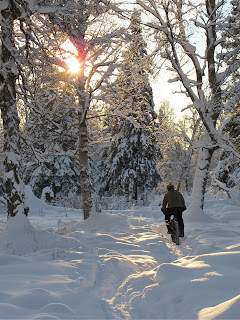 Why do I say this? Because this is the kind of winter for which fat bikes were made. Anchorage averages 63 inches of snow per year. Right now, we’re a shade over 90 inches, and it’s only mid-January. Snowstorms have been coming back to back, leaving almost no time for bike traffic to pack the trails into prime condition.

But when conditions are marginal, only a small handful of people are usually seen hitting the trails. And, in most cases, they’re the same devoted riders who have been riding in tough conditions for years. Others seem to be waiting until the singletrack is “groomed” by other riders.

And then there’s the cold. I admit it can be hard to feel motivated when the temps drop below zero, but only the truly addicted know the joy of a frigid, bluebird day like today. Leonard and I rode for a couple of hours in the sunshine today, and passed by Smokejumper trailhead when the temperature was about -15F.

Only two cars were in the parking lot. And it was a beautiful day.

I think owners sometimes need to be reminded that Alaska fat bikes were inspired by cold air and soft trails. They exist so we can ride on days when a lesser bike just won’t cut it. But the full benefit of such bikes is revealed only to those who are willing to work for it.

Jimmy Doogan said it well in the movie A League of Their Own:

“If it was easy, everyone would do it.”

(Photo credit: Today's shot of me was taken by my daughter, Hannah.)

I totally agree! Most of the people I know that have bought fatbikes this year never leave the local single track. If it's really cold you don't see any of them out enjoying it.

I've been predicting this as fat bikes have been seeing the same explosion of interest in this part of the country.

I think I commented on Vito's blog (above) that it's similar to the people that bought Hummer's and then only used them to run to the grocery store.

There are going to be people that don't have the cold weather skills to actually go out and ride in the snow. That's okay with me. I've been afraid all those new fat bikers are really going to piss off a lot of snowmobilers that have only had to deal with me on their trails the last 5 years.

It's disappointing that we haven't had hardly any snow or cold now that I'm a new fatbike owner, but I do ride every day, occasionally fat, hoping winter actually arrives. Seems poor form that the Alaskans don't share some of that snow with us poor schlubs down in the lower 48...

Or just a different passion? Rushing down singletrack through soft snow is my idea of fatbike fun, but I've noticed there's lots of people here using fatbikes differently.

There's an older gentleman who got one because he wants to be able to ride to work using the paved walking trail instead of the road. Just because it's a different use, doesn't make it a worse one.

I also think people need to time to get used to snow biking. My first year I didn't get out a lot. I didn't understand that snow biking was actually a different sport - not just mountain biking on snow. I spent the first season being frustrated and see lots of newbies feeling the same. You've got to get used to falling off the bike and trudging through snow, before you can really start enjoying it.

I'm still wishing for my own fatbike, but I've been lucky to have a long-term loan of a mukluk this winter while a friend nurses an injury. It's been the cold that's kept me (and the mukluk) at home sometimes. These sunny days (and new warm boots) help me get out in it, but I'd love to see some single digits ABOVE zero for a change.

I think Sierra is pretty close for a lot of people. I know of a lot of people, myself included, who have just recently (within the last year or so) gotten a fat bike to open more opportunities in the winter. Many of us also do a number of other activities already, such as cross country skiing, running, hiking, etc... There are a lot of us, specifically a bunch in the triathlon community, that have gotten them to supplement other winter activities, not necessarily for the fat bikes to be the primary winter accessory. I ski more than I bike, but now I can get out and bike a couple times a week hopefully. If the weather is marginal, I will be more likely to go with my main activity (skiing) before jumping on the bike.

fat bike smat bike. my studded tires have been working fine. Deep snow is best for skiing. Nail on the head comparison to hummers...

That's alright we can buy their shit for a third the price when they realize it's not for them. I would like a couple more fat bikes set up in different themes. I invited a friend of mine on a ride tomorrow, he was going to ride one of my fat bikes but now he just pussed out and said he would just like to stay home and eat donuts and relax.

One, I know a lot of people who bought fat bikes this year in order to do long adventurous rides like to Spencer Glacier, or on many of the various snow machine trails throughout the state. So no, we wouldn't see them in town on the trails.

And three, and this one's gonna sting a little, it's been a fucking great year for backcountry skiing.

That all being said, I've been out riding, and I'm okay with the trails not being packed with traffic.

And since you are back in town, wanna ride Wednesday night?