One of the greatest things about the sport of mountain biking is how it got started: a bunch of people using old bikes to bomb down a mountain, just for fun. 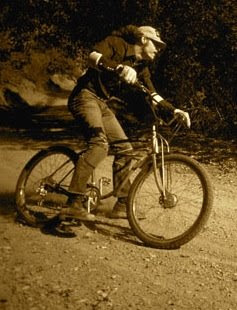 On the earliest competitive days, they might have done it for the beer, or the bag of weed, that awaited the first guy to reach the bottom of the hill.

It was simple, pure and unspoiled. It still is, when it’s done right. But mountain bikes—and mountain biking—have come a long way in three decades. People have made boatloads of money from the sport; it has been a medal event in the Olympics; and the bikes look nothing like those early pre-war Schwinns that first rolled down Mount Tam. Hell, when I stood at sales counter as the shop guy handed me the manuals for my full-suspension bike, my wife looked aghast and said, “I didn’t get that many manuals with my car!” So much for simplicity.

Sometimes, it’s good to be reminded of how it all started and what the soul of the sport was—and still is, in my opinion. That’s why I recently watched Klunkerz after Billy Savage, the producer and director, asked me if I wanted to have a look at his labor-of-love film about the rise and evolution of mountain biking. It’s full of old 8 mm footage of guys like Charlie Kelly, Joe Breeze, Gary Fisher and recent interviews with them, their friends, and other Marin County bike crews—such as the Morrow Dirt Club and Larkspur Canyon Gang, two groups whose contributions to early mountain biking are commonly overlooked—as they tell the stories in their own words.

Klunkerz is the best documentary I’ve ever seen on the birth of mountain biking. So much has been made over the years of guys like Fisher, Breeze and Tom Ritchey (and the debate over which of them “invented” the mountain bike) that it’s good to see a comprehensive account of the other key people who were part of the Marin County scene. Not to mention how much fun it is to watch those guys blasting down Mount Tam at warp speed, with minimal safety gear, on ancient bikes with bad brakes.

If you get your hands on a copy of this DVD—and I recommend clicking over to Klunkerz.com and ordering one—make a point of watching the bonus features on the disc, especially the short piece on John Finley Scott. Never heard of him? Most people haven’t, but he was traveling on his own homemade mountain bike 20 years before those guys in Marin, and later helped bankroll the first efforts to manufacture mountain bikes.

Do yourself a favor and check out this film.
Posted by Tim at 11:22 AM

Email ThisBlogThis!Share to TwitterShare to FacebookShare to Pinterest
Labels: Klunkerz

Hey Tim,
Thanks very much for the kind words. I really appreciate it. It was a blast to make, and I'm really honored that the guys let me tell their story. You mentioned Finley, who was a fascinating man. You can see more on J.F. Scott here...
Finley #1
http://www.youtube.com/watch?v=gHWo_h1nBx4
Finley #2
http://www.youtube.com/watch?v=jas0ZgyyKGQ&feature=related
Finley #4
http://www.youtube.com/watch?v=hjMUDjS_c9A&feature=related
...this is only part of the film I made as a tribute to J.F. Scott at this year's MTB Hall of Fame induction ceremony. I'd like to think that his role in Klunkerz has something to do with his induction, but who knows? The only thing I do know is that his was a senseless murder and one of the California cycling advocates is sorely missed by his friends and family.

I picked up a copy a bit ago and really love it:)