Don't get goosed by a moose

Wikipedia describes moose as “the largest extant species in the deer family." 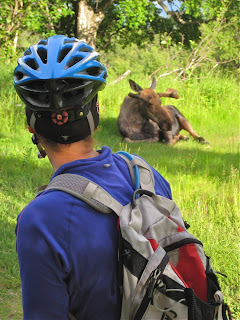 You’re unlikely to get an argument from an Alaska mountain biker if you just describe moose as “big, tank-like beasts with puny brains and nasty tempers.” One of these hairy buggers can open a can of whupass on any hapless bike rider, especially if the moose happens to have a newborn calf nearby when mountain biker shows up unannounced.

So far this spring, I know of at least five bad moose encounters on the trails at Kincaid Park, and in three of those cases, mountain bikers got roughed up. The latest was my friend Darcy, who was run over by a charging moose just yesterday. When she rounded a turn and saw the moose, it was already homing in like a free safety about to zap a wide receiver on a crossing pattern. Fortunately, Darcy escaped with only bruises instead of broken bones.

A week ago, local wildlife biologist Jessy Coltrane issued a warning that “While the trails are a great resource for the community, biking on these trails during spring calving is a very risky activity. Cow moose aggressively defend their calves. While mountain biking has become very popular in recent years, it remains a dangerous activity in bear and moose country. Bikers moving quickly on narrow winding trails through prime moose calving habitat are at an even higher risk.”

Coltrane did what her predecessor, Rick Sinnott, often did when an animal was acting up—she asked mountain bikers to stay off the trails.

Everyone has to make his or her own decision about whether to avoid the new trails built by Singletrack Advocates last fall. I rode them last Sunday and had a good time even though my legs never showed up. My friends and I took a calculated risk and things worked out. Darcy took a calculated risk and got steamrolled. Could have happened to anybody.

Make your own decisions, but know the risks. There are a lot of mama moose out there, and they're on edge because newborn calves are to bears and wolves what Krispy Kremes are to fat-asses like me. And some of those cows weigh more than a thousand pounds. Contrary to popular belief, a moose is NOT more likely than a bear to kill you. Fatal moose encounters are very rare, but ass kickings dished out by moose are less of a rarity. And they hurt.

Stay upright out there. And don’t go under a moose.
Posted by Tim at 9:10 PM

Isn't it the possibility of bodily injury or death that makes trail riding so exciting? I'd rather take my chances with the wildlife, gnarly hairpin turns, lightning (Anchortown needs more of this), and deranged sourdoughs than risking a heart attack from eating too many Baconators and sitting on my fat ass every day.

It's all a matter of perception. I feel safer when outdoors enjoying physical activity. Others feel safer indoors where nothing but their furniture and sedentary nature can get them.

I see moose regularly. The best technique for avoiding trouble is simply to be aware of your surroundings. It is difficult to keep your eyes moving around looking for moose, and simultaneously keep your front tire rolling in the right direction. You may even have to go a little slower in order to pull it off. But if you can manage it, you can avoid (albeit narrowly) almost all of the problems associated with moose. And you still get to enjoy the good things--like just seeing moose.

Do dingy "bear bells" work with the moosey's??

Apparently, they help the moose, Alby. Darcy's moose was already charging when she rounded the corner, so her bear bells probably told the moose she was coming, and gave it a head start.

Personally, I'm not a believer in bells, even for bears.