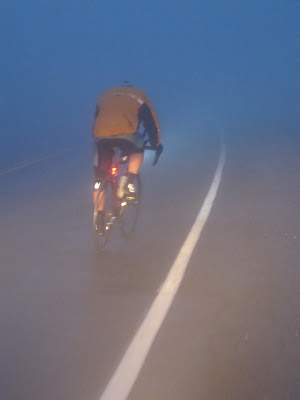 Leonard pedals up Thompson Passjust before midnight.
Of all the bizarre memories that come from crewing for a rider in the Fireweed 400 solo division, it was the fog in this year’s race that is going to haunt me the longest. Any ultra-distance bike race contains moments of despair, humor, exhaustion, boredom and sometimes even a little excitement, but you hope danger will be kept to a minimum. As we crept into the late evening hours Friday night, a photographer who was driving up and down the course warned me and crew partner Sarah that visibility was going t 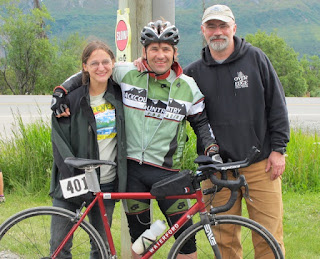 o diminish as Leonard — the racer we were supporting — approached Worthington Glacier and began the climb up Thompson Pass. Daylight was fading, and the pass was covered in thick fog.This was already going to be one of the worst parts of a very long race. Leonard was facing a hard climb, and from midnight to 5 a.m., race rules required us to keep him in our headlights as we drove directly behind him to shield him from traffic and help him see the road. Instead of regularly sprinting three or four miles ahead to set up for giving him food, supplements and fluids, we would have to drive slowly in dim light for at least five hours, trying to stay alert while pacing him at close range.When we arrived near the base of the glacier, Leonard rode into fog and the visibility began dropping. Sarah and I decided to start pacing an hour early because if exhaustion or poor pavement conditions forced him off the shoulder and directly onto the highway, he would be invisible to fast-moving vehicles until they were within feet of his wheel.Conditions already seemed bad. But shit was about to get real.As Leonard crested Thompson Pass about midnight, visibility dropped to only a few feet as he steered into the descent. When we were close enough to see him, he was signaling that he wanted us closer for more light, but we were already dangerously close. If we dropped back as little as two or three feet, we would completely lose sight of the tiny red light on the back of his bike. Sarah was driving and struggling to find a position behind Leonard that would allow us to see him without getting so close that we might hit his wheel. Each time he opened a slight gap and disappeared, I would be urgently nagging the ever-patient Sarah to “Move up! Move up! Move up!” until we could again see a red dot in the fog. We could only hope that he wouldn’t tap his brakes as she closed the gap.We were intensely focused on maintaining some sort of visual contact with Leonard, so there was little time or mental capacity for consciously considering the risk of running over him, but we both knew it was a possibility. 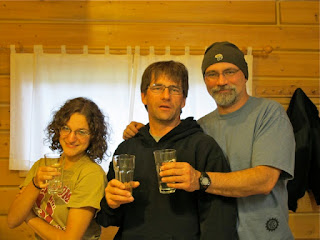 Meanwhile, as if we needed an extra dose of anxiety, the amber lights of a large semi came appeared in our mirrors. Despite all the complaints cyclists have about impatient motorists on the road, I will be forever grateful that within a minute or two, the truck driver appeared to figure out what was happening in front of him and he backed off until we descended far enough to reach better conditions. He could have made our situation drastically more dangerous, but he gave us the space we needed to continue our mostly blind chase down the mountain.

Hours later, on the way back toward Glenallen, Leonard was stopped for a food break when he asked if we had taken any good photos of the descent. He was baffled when I replied that no, there weren't any pictures.

“We were a little busy trying not to kill you,” I told him.“Really?” he asked. “Was it that bad?”All we could do was say, “Yes, it was,” then get him rolling, throw everything back in the car, and head up the road to our next stop. I was consciously trying to forget the pass. Sarah and I still had work to do, and Leonard had a lot of pedal strokes between him and the finish line.The sun came out on Saturday morning, and with every mile we put behind us, I was happy to be farther away from darkness and fog.

Just before 6 that evening, after an amazing ride, Leonard finished his third straight Fireweed 400. It took 29 hours, 56 minutes and 10 seconds.

We ran into the same scenario when my brother Myles, Joe Fish and I did the 400 relay. It was without a doubt the most scared I've ever been on my bike. My fear wouldn't let me do more than about 15mph on the downhill after cresting the top. I was so scared of something being in the road and not being able to see it. If there had been a house on the road you would've hit it before you saw it. Great work Leonard!

This is not meant to minimize the fear-factor of this situation but that is my one criticism of my toaster...because of the truncated front end, I always feel like I am far closer to things than I actually am. Next year, you guys need a laser distance site something mounted on the front bumper. I'll invent that by then.

Better yet, as an experienced Element owner, you can be on next year's crew as the official team driver.

Give you credit. I remember riding my bike when the fog came in as how terrified I was because I couldn't see anything.