Large and in charge

We all know how annoying some people can get when they see pictures of themselves, or hear their recorded voices 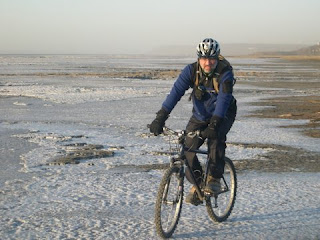 So I almost feel bad about saying ... Damn! Do I look like Chewbacca on a bicycle, or what?

Maybe I should make sure I'm photographed only when riding the fat Pugsley. It might make me look a beer or two thinner.

Maura sent me an e-mail last night asking if I intended to do the Frosty Bottom 50. I told her I was tempted. A little while later, I stepped on a scale and found out I've already gained six pounds this winter. And it's only the first week of December.

I think I'll do the 50-mile race, even if it turns into a death march for me (and it probably will). It's time to start suffering for my sins of consumption.

As soon as I finish this bottle of wine, I'm cracking down and gettin' back in shape.

I mean it this time.

Far as I can tell the only style points for winter cycling are in the comfort category. I spend more time looking at the scenery around you anyway and that is lookin' damn fine!

if I looked like you do now,people would start calling me "Tim".

You and me both.

"A beer or two thinner"

I just heard on the 5 a.m news, while riding to nowhere on the trainer in my bike shop, that it's heathier to be "fit and overweight" than it is to be
"fit and thin". They only tell news like this at 5 a.m.

Of course they were talking about people 70 years and over....but ignore that.

Now do as I am doing: Go to fridge, grab beer, pry cap off with teeth, spit out cap and any broken teeth, guzzle beer, burp and wipe face with sleeve.