I'm still not quite sure what happened Saturday night. One minute I was cruising fast across the South Anchorage coastal flats trying to catch up with the group after I had stopped to shoot a couple of photos, and the next thing I knew, my face was meeting snow and ice. My brain didn't register anything in between.

It's not a good feeling to combine blinding pain with total confusion. Confusion as in, "What the hell just happened?" and "How bad is this going to be?" I pulled myself onto my hands and knees as best I could with my feet tangled in the frame of my Pugsley, and started watching the snow to determine how much blood was dripping onto it, and whether there were any teeth involved.

The next few minutes are a bit of a blur, but they involved quick cell-phone calls to the guys up ahead, and to my wife and daughter as I asked them to grab my 4Runner a 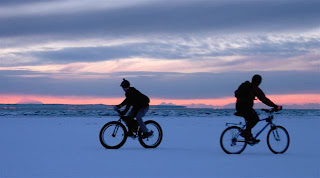 nd meet me at a nearby road. Somehow I also managed to be concerned about littering, so I pick up my busted helmet visor and stuffed it into my fanny pack before pushing my bike up a bluff that I knew would take me to the road.

A quick stop at a 24-hour clinic involved a doctor shoving one end of a wooden swab stick from the inside of my lip out through the front of my chin so that she could tell me, "You've got a through-and-through," before she looked at her young assistant and asked, "Are you OK?"

The girl who was holding a light on my face then explained that she's generally OK with seeing blood, but has a problem dealing with bloody faces.

Me, too, when it's my face. Especially when someone's putting a stick in my mouth and then telling me it's popping out through the beard on my chin. And oh, by the way, my jaw might be broken.

(I thought the hole meant a tooth had penetrated my lip, but my wife, who is a nurse, corrected me today by explaining the angle was all wrong -- something pierced me from the outside in. Probably ice, or a rock.)

A little later, I was in Provi 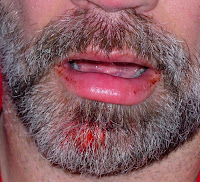 dence ER being told my beard would be shaved off for stitches, and a big, musical machine that sounded like an arcade video game was rotating around my head to scan my jaw.

The result: No breaks, but a damn sore jaw. My teeth are all still there. And stitches wouldn't have helped much, so the beard stayed on. I went home with a tetanus shot, and prescriptions for penicillin and fresh supply of Vicodin. I'm swollen from my neck to the top of my nose.

But every cloud has a silver lining, as they say.

The Pugsley's OK, and I have a license to get high and drink milkshakes.
Posted by Tim at 5:41 PM

Ugh! Rio will be happy to know you posted a picture. John wanted to know whether you could talk. I'm glad to see you are able to write about it less than 24 hours after the event. Get well soon.

Golly, Rev those angels sometimes fly to close to the ground ! So cool to see your ok ! Now how about some facial armor to protect the bike from that gnar gnar chin hair.
Rio

Dude just go with it. Mount a stud in there and be all pierced like the kids.

When the doctor told me what she was doing with that stick, I said something about shoving a pencil through my face. She replied, "Are you an accountant."

I asked why she'd think that, and she told me she thought it was curious that I chose the example of a pencil. (Do accountants still use those, Maura?)

I told her no, I'm not an accountant. A pencil just happened to sound big and painful.

Youch, but at least the cloud has a silver lining. Good luck dude get better.

Should have asked for the demerol. Everytime I'm in the emergency room and they ask about my pain level (on a scale of 1-10 or the smiley face to the pained grimace face on the poster) I'll answer with the 10. That ususally gets you the demerol shot in the ER and a script for hydrocodone. When you leave the ER you feel like you're ready to get back on the bike. Get well soon. You may not be able to ride the next Frigid Bits, but you can at least come out and drink beer. I'll buy you one.

Tim, Tim, Tim. "Every time I'm in the emergency room?"

Thanks for the tip, buddy, but I'm hoping ER visits won't become a habit!

On the other hand, it wasn't that long ago that I had four surgeries in five years, and found that morphine is a beautiful thing, when you need it.

And Rio, thanks for planting a Willie Nelson song in my head all evening! Fortunately, I like Willie, and that song.

Me and my fat lip will see you guys soon.

After all of those stitches-and-missing-teeth comments I had to endure for playing hockey...

In the words of John Belushi: "My advice to you is to start drinking heavily."

Thank goodness they saved the beard!

Oh man! Sorry to hear. Rest up and get back out there!

mmm. you can add that pic to the bike falls flickr group...

oops. here is the the bike falls group