Bearanoia is a puzzling affliction. One never knows when it’s going to flare up.

During a solo ride outside Whitehorse a couple of w 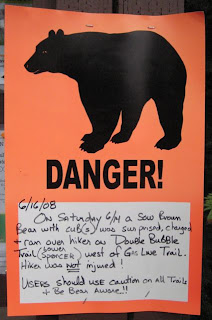 eeks ago, I found myself in sort of a narrow ravine with steep sides and fairly thick vegetation. Suddenly, for no obvious reason, I felt somewhat in danger. Like maybe I was being watched. I yelled “Hey bear!” for a few dozen yards until the terrain beside the trail opened up a bit, then I pedaled along wondering why I had suddenly felt nervous.

A few days later, I was zooming down another trail outside Dawson City when I startled an animal a few feet to my right and heard a loud rustling in the brush as some critter suddenly began moving. I barely reacted. A quick glance toward the source of the sound, a quick listen for paws hitting the ground behind me, and I blissfully continued barreling toward camp.

These were different situations, obviously. In the ravine, I was moving slow and surrounded by high ground. Maybe some prehistoric survival instinct was kicking in. On the Dawson ride, I had the advantage of speed and downhill momentum. On the other hand, I knew I was a few feet from something—ursine or not—that was startled and on the move, but I took it in stride.

Riding among bears is a fact of life in this part of the world. I’ve talked about it with friends during trail rides, and most of us figure that—even though we rarely see the animals—several nearby bears are likely aware of our presence every time we ride on the Anchorage Hillside. Biologists have confirmed that the area’s full o’ the furry buggers, which is why we routinely see warning signs posted, such as the one in today's photo.

Conventional wisdom says the best way to avoid a dangerous bear encounter is to let bears know you’re coming so that you won’t surprise them at close range. I’ve ridden with people who wear bear bells, people who blow whistles, and people who ride in silence, making no attempt to let bears know they’re approaching. Bear bells are annoying, and whistles sound like tasty marmots, so my approach is to keep a canister of bear spray close at hand in a bottle cage, and to make noise by yelling … when I remember to do it.

Overall, I probably don’t think about bears nearly as much as I should. I often catch myself hypnotized by the flow of a trail and then realize I’m moving trough the forest quickly and silently—which is pretty much asking for a few hundred pounds of trouble.

Bouts of Bearanoia can be unnerving. But they aren’t necessarily a bad thing. A lot of us might benefit from more of them.
Posted by Tim at 10:29 PM

Annoying at first but you'd be surprised how quickly you get used to the bells. I also find myself drifting in and out of awareness while riding some primo single track and that scares me. The bell never forgets to make noise.

Bears! Blimy, all we have to worry about is the occasional deranged mutt...

I would *so* crap my shorts if i ran into a bear on a ride.

Monkee, I failed to mention that I own bear bells, but stopped using them years ago not only because of the annoying noise, but because their effectiveness is highly questionable.

They don't make a sound that animals necessarily recognize as human, or otherwise frightening. Some bear biologists suspect bells might occasionally attract young bears who are curious to investigate the sound.

Also, if you've ever waited for a friend with bear bells to catch up to you on the trail, you might have noticed the sound of bells doesn't carry well on windy days, or for long distances through heavy vegetation.

I know a lot of people rely on them. I'm simply not convinced they're worth using.

I've heard them referred to as "Dinner Bells" as well...

We have a few bears around here, but I'm more scared of teenagers in lifted pickup trucks.

And mountain lions. Haven't seen one, but it almost makes it more scary. I know they see me.

Just because you're bearanoid doesn't mean they're not going to eat you!

So far the most dangerous thing I've had to content with while riding is my own incompetence and the hard, unforgiving ground.

Okay, I feel like I’ve been targeted here. Why in the world didn’t you say something before? I’m going to buy one of those horns like Ken had the other night and really give you something to be annoyed about!

I've gotten used to your bells, Maura. (Hell, I had to -- you wear them year-round!)

They don't annoy me as much when they're on other riders, because there's always a few feet of buffer space. I tried using them on my own bike one summer, and they drove me batshit crazy.

And batshit crazy is different from your normal persona how?

Hilarious! I was just running this last week with some friends and we were talking about bearanoia (we use the same term here as well)...It really is weird how it hits you when you least expect it.