When my son was about 10 years old, he wanted a neighbor kid to come outside and play. So he rolled his bike out of the garage, strapped on a helme 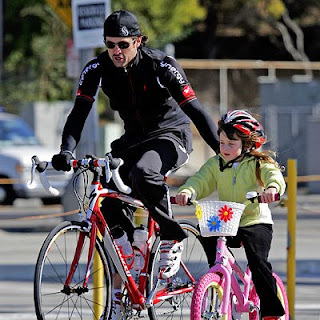 t, rode across the street, took off the helmet, and then walked up to ring the doorbell.

That was a proud moment for me as a bicycling parent. It was when I realized that, to him, helmets and bikes were inseparable. It didn’t occur to him to not wear a helmet for a short ride across the street, because he had never experienced riding without one—and he had never seen Dad ride without one, either.

Oh, I slipped up and did it a time or two for short distances, but never in front of him. I have this apparently outdated belief that if I lead by example as a parent, I’m making it easier for my kids to do the right things.

Too often, I see families out on rides with only the kids wearing helmets while the parents cruise along with the wind in their hair, happily sending a singular message: Helmets are for children, but grownups don’t use them. This is tantamount to telling your kid 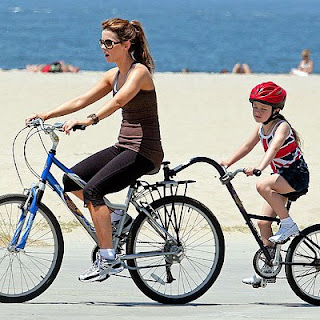 to never touch cigarettes, but saying it as a haze of Marlboro smoke rises from your lips.

And anyone who thinks kids don’t recognize hypocrisy from Mom and Dad needs to pull his head out of the sand in his ass. Trust me, those little buggers listen more closely than they want you to know, and they’re scanning everything for loopholes and inconsistencies.

I came across these photos while randomly following links from fark.com and came across an InStyle magazine slideshow on “green” celebrities—which meant every picture contained either a Toyota Prius or a bicycle. Of course, not one celeb wore a helmet. And that’s fine, except for the shots of the beautiful people and their spawn, because regardless of how rich and famous you are, you still have an obligation to be a responsible parent.

These two shots in particular were annoying. Patrick Dempsey claims to love road riding (check out that fine Roubaix), so he should know better. But there he is, teaching his daughter that Daddy’s too cool for a helmet. Of course, he's also teaching his daughter to wear hers incorrectly, so what's the damned point anyway?

The Kate Beckinsale's picture pissed me off not only because she's setting a bad example for her kid, but also because I simply hate having a reason to be annoyed by someone so scorchingly hot.

She’d be even hotter in a helmet.

(Kate Hudson was spared from scorn in this post because in her slideshow photo, it sort of looks like she isn’t wearing any pants. Somehow, that worked for me.)
Posted by Tim at 9:30 PM

Email ThisBlogThis!Share to TwitterShare to FacebookShare to Pinterest
Labels: helmet

I wear a helmet everywhere except the rail trail.....it's my guilty pleasure to feel the wind rush over my high forehead :-)

Not to mention Mrs. Beckinsale appears to have her seat too low, while her daughter looks to have about proper leg extension.

I agree with you, We teach our children best by example. If we want them to wear their helmets every time they are on a bike, we can't let them see us without our helmets on.

Do you think she needs a helmet on that beach?

Yeah, and the one of Matthew McConaughey works for me since he's not wearing a shirt...
But seriously, there's a sign at a school along my commute that tells parents to buckle up because "someone depends on you." It's the same for helmets.
At the shop this spring, a teenage daughter told her mom who was reluctant to get a helmet: "That's OK, mom, I have another set of parents."
Mom got a helmet.

helmets are personal choice.
lives will be saved by the above actions, more than wearing helmets.
steve - scotland