Bend over the check-in counter

Can't remember why I do it, Oh, maybe I can.
An honest man these days is hard to find.
I only know we're living in an unforgiving land.
And a little lie can buy some real big piece of mind.

I’ve long believed that the people who set airline baggage fees are on the same rung of the evolutionary ladder as used-car salesmen. In othe 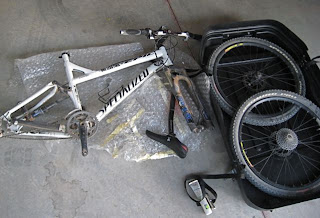 r words, at the low end of multicellular organisms.

For years, cyclists have taken it in the shorts when flying with their bikes. Anything in a box the same size and weight as a bike flies for a lower charge, as long as it’s declared as anything but a bike. Skis, golf clubs, you name it, they all cost less.

The fee for traveling with a bike can be outrageous. On Delta airlines, it’s $175 each way on domestic flights. Hell, that’s higher than the cost of a seat on some domestic flights. That’s wrong. I’d even say immoral.

That’s why I’ve never had a problem with lying about the contents of my cargo. I’ve often seen the baggage fee for my hard case drop by 50 to 75 percent simply because I told a counter agent it wasn't a bike. The size and weight didn’t change, but the charge did.

On our recent trip to Moab, one of the guys in our group paid $350 in roundtrip fees for his bike. Another guy in our group—me—paid $125. Why? Because my case is designed in such a way that it wouldn’t necessarily have to be carrying a bike, and I have no moral problem with declaring the contents as being something that flies for less.

I don't understand why the bike community continues to accept such discrimination. Huge numbers of people have taken up cycling in recent years. I’ve read magazine articles calling it “the new golf,” meaning group rides are where big business deals are often struck. The “Lance Effect” has pulled in everyone from laborers to Wall Street titans, and you know plenty of lawyers are in the mix.

So what I want to know is, why hasn’t one of them led the charge for a class-action suit demanding fair fees from the airlines? Hell, I was invited to join a class-action suit against Apple because one version of the iPod Nano worked just fine but scratched too easily! And yet nobody's decided to sue over egregious and discriminatory charges for bike boxes?

C'mon, all you lawyers. I'm startin' to lose respect for ya. It's time to stand up for fairness.
Posted by Tim at 9:39 PM

I am relieved to say that here, it's a second piece of baggage. Full stop. Domestic, that's usually AU$20, but unofficially if both pieces are under 20kg, the bike flies free :)

Who manufactures your case?

What a scam! I have never travelled with a bike but it would be nice to get this fixed before I do as it's only a matter of time until I do, perhaps for my next trip up to Anchorage though I don't know when that will be.

Canada 2000 Airlines ( now bankrupt and deceased) used to have a "sports equipment flies free" promo. During their short Anchorage - Vancouver route in the early 00's(to support cruise ship packages) I was astounded to see how many octogenarians were returning from their Alaska cruise with golf bags....

Bob, my case is the one that Performance mail-order bike shop sold for years. They don't seem to have it anymore. The main thing I strive for is NO bike identifiers: No stickers, no "Bike" anywhere on the box, no bike hats or T-shirts on me, etc.

I'll sometimes fly wearing a collared shirt so I look like I could be traveling for business. It seems to help when passing off the case as something work-related.

I'll tell you what's bullshit...the fact that I have to login to Google to comment on you blog. That's bullshit. Regarding the $350 in transport fees...thankfully I had budgeted for that. My feeble yet determined attempt at lying about the comments of my Trek bike box yielded only 15 minutes of confusion, same fees.

How does "contents" turn into "comments"?? D'oh

Sorry about the login thing, Monkee. That's my way of stopping all the gutless shits who enjoy posting anonymous, bullshit attacks on half the stuff I write.

I'm not sure about MtB's, but if you want to travel with a touring or other road bike, check out this site for a travel bike with an S&S coupler system that breaks down for a 26"x26"x10" (62")case, which meets FREE baggage requirements for every airline. Spendy though...

Bob - a similar case on the market is the "Iron Case" & it doesn't say anything about bikes on it...

In my experience, Delta is the worst - 10 years ago they charged $75 - that was the first & only time I've flown into Salt Lake City.

Alaska has always been easier going - of course it was better in the days when a generous tip to the skycap took care of things.

I always print out the most recent policies from the airline website in case someone tries to overcharge... and if they undercharge, we cross our fingers that we won't be called back to the check-in counter.

It is absurd, and makes it kinda funny that alot of international flights fly bikes for free.

you know what else is absurd, monkee not posting in his blog more...