A few weeks ago, someone in Southern California found this blog after Googling “bicycling is an overpriced yuppie sport.”

I thought that was a pretty strange way to 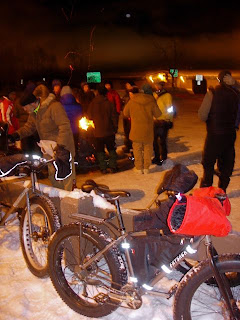 Then I remembered walking across a tiny street between the beach and my hotel in Santa Barbara last October and hearing the buzz of tires on pavement behind me. I turned around to see a pack of about 20 roadies wearing color-coordinated kits and pedaling very high-end bikes.

The collective value of that group’s gear could have paid for a nice house in many parts of the country. Style matters in a town like Santa Barbara—I don’t think I saw a simple pair of black, logo-free Lycra shorts the entire three days I was there. And all the fancy bikes, when they weren’t being ridden, seemed to be on the roof racks of shiny new cars that couldn’t be touched for less than $45K.

So I suppose that in SoCal, if you’re a working-class stiff who commutes on a freeway and lives from paycheck to paycheck, seeing a few scenes like that might make it easy to view cycling as an overpriced yuppie sport. That’s a shame.

As another Frigid Bits season gets under way, I find myself wishing that the person who typed that search phrase into Google a few weeks ago could do a night ride and then stand around the burn barrel with a bunch of Alaska winter mountain bikers.

Yeah, there are usually some pretty expensive fat bikes scattered around, but they’re more likely to be in the beds of battered pickups than on the roofs of European sedans. The riders wear fleece and ripped Carhartts, and instead of looking down their noses when someone rides up on a Frankenbike, they check it out and respect the rider for making it work.

When the flames are rising and the snow is falling in a dark parking lot on a Saturday night in January, those are the people who prove that this ain’t no overpriced yuppie sport.
Posted by Tim at 7:43 PM

Commom folks with a common goal...Just enjoying the ride and the companionship of friends.

As the weather gets more winter like down here in balmy MN, I am seeing more utility cyclists and fewer lycra-clad as the fair weather set wait in traffic while heading to the health club to spin on an immovable bike.

The funniest thing... around here we used to say this:

I'm not sure if it still holds true - a lot of high class bikes have been popping up as the sport grew more famous. But we definitevely also have regional differences in the equipment league (especially to be seen on the road). So to speak we have our own So-Cal...

And he illustrates the point with a picture of the one fatback that does travel on the roof of a European sedan.

Well, I did say "more likely" to be in the bed of a pickup. That's the beauty of Frigid Bits: Rich guys are welcome too!

Nice post!!!
I'm rich in the fact that, i can and do ride my bike, no matter what time of the year it is!!!