I can’t really explain why, but I somehow like knowing that David Byrne—like many of us—has spent years traveling with bikes and sneaking them into hotel rooms to assemble them with hex wrenches. It’s one of t 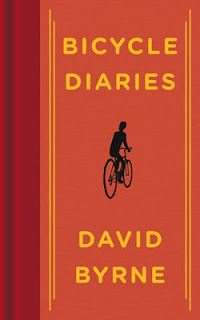 hose covert experiences that bike geeks have in common, regardless of wealth or fame.

And like the rest of us, Byrne knows that traveling by bicycle is far more enjoyable and liberating than driving a car. He has been riding in New York City since the 1970s, and routinely took a bike on tour back in the ’80s when he was traveling with the Talking Heads so that he could spend his days exploring new cities instead of getting wasted in his hotel room. He has been traveling with a bike ever since.

Along the way, he’s been a student of architecture, traffic, urban design, globalization, politics, art, music, human rights and any other subject that stimulated his mind. Eventually, he decided to put his observations down on paper, resulting in his latest book, Bicycle Diaries, which was recently sent to me by the folks at Viking, Byrne’s publisher. Viking is obviously marketing the book to cyclists, but it’s a curious strategy, because it’s only partially about riding bikes. It’s also about all the other topics that interest Byrne.

Byrne isn’t a cyclist in the conventional, hardcore, sense. He doesn’t go for Lycra, weird shoes or flashy jerseys. He just finds it more fun, healthy and sustainable to explore cities and zip around to parties and gallery openings by bike instead of in a car. And the guy gets around. He has pedaled through the funkiest sections of many American cities, and explored the likes of Istanbul, Manila, London, Buenos Aires and Berlin. Few bicyclists have his range of travel experiences.

It’s an unconventional book to market in the bike world, because it contains very little of the standard content of a book about riding—you won’t learn a thing here about eating, training, equipment, etc. Then again, it seems to be an unconventional book to market in any world. It’s something of a David Byrne manifesto. And that’s not a bad thing, if you’re curious about one of the most interesting minds in music.

If nothing else, I recommend reading Byrne’s chapter on New York, as well as the book’s epilogue, which contain the most detailed information on his bicycle advocacy and thoughts on what cities can become if people embrace the change that bicycles can bring.

It just might be enough to make you believe that everything doesn’t always have to be the same as it ever was.
Posted by Tim at 8:06 PM

I need to put this one on the list!

Great how he enjoyed the places he traveled to. You hear about some bands that only knew they were in a different country by looking at their collection of plane tickets.

Ah, Tim! You made me buy the book!

If that writing & editing gig doesn't work out, you could go into sales...