He meant to do that

"I meant to do that."
—Pee Wee Herman, to the boys who saw him
wreck his bike in "Pee Wee's Big Adventure."
"Hey, get a shot of this," Leonard said as he eased his bike up to the edge of a steep drop into a snow-covered boulder field this afternoon. The only thing missing that would have made it a classic redneck disaster setup was, "Hold my beer." 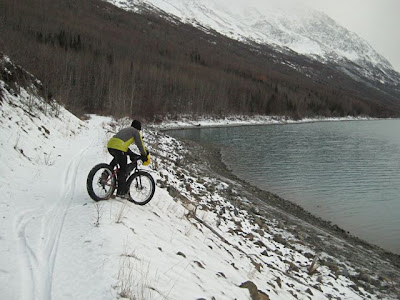 I snapped a photo as he quickly put both feet on the pedals to complete the shot. 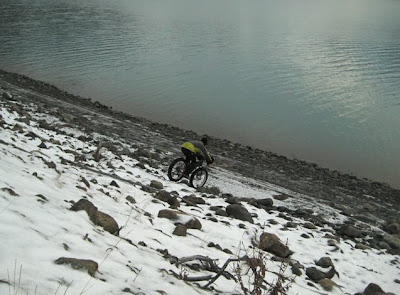 Then he started rolling, and there was no turning back. My first thought was of broken bones or shattered teeth, and how we'd deal with that at Eklutna Lake, where we were several miles from the parking lot, and very alone. We hadn't seen anyone on the trail for hours. 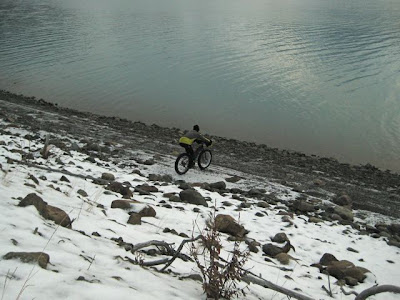 When he hit the narrow beach, my thoughts shifted to the very strong possibility he was going swimming—at 20 degrees Fahrenheit—and how we'd warm him up in the middle of nowhere.

Just as I yelled, "BAIL! BAIL!" he skillfully stopped at the water's edge. When he got back to the trail, Leonard swore he did it all on purpose.

All I know is that it was either a ballsy stunt, one hell of a survival ride. Whatever. I declined his invation to try it.
Posted by Tim at 8:26 PM

@$%&ing Nuts!! I was really expecting an endo or a photo of him entering that oh so cold looking water.

I remember a time out at N. Bivouac when John and I said, "You can ride that Tim" and you ended up grabbing a tree branch that broke off in your hand. You slid about 1/2 way down the hill under your bike and we felt really bad. Well, after we got done laughing we felt bad. M

Shhhhh! You were supposed to forget about that!

holy smokes. seriously.
I just found you from speedways blog.