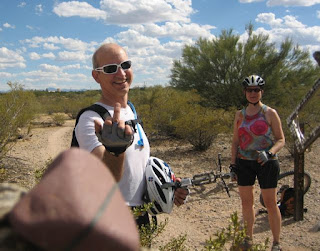 Giving his wife one more reason to be proud.
Our latest installment in the infamous Finger Series comes courtesy of local shop czar Jon, who did the big flip-off while riding Tucson’s sunny Fantasy Island last month while the rest of us were listening to our studs clattering on icy pavement. Somehow, it feels like we should be giving him the bird. 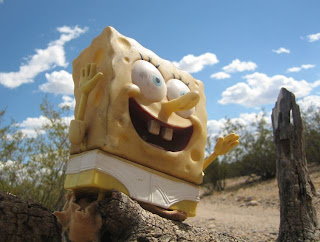 Spongebob: From Frigid Bits Ice Crit icon to
Fantasy Island fetish, he’s bad. He’s nationwide.
Spongebob, one of the talismans that guard the trail, would surely have raised a finger for the cause as well, if only he’d had some flexible digits.

In a sad first for the Bicycles & Icicles blog, I must publish a correction. Last weekend’s post about the Frigid Bits scavenger hunt referred to a “brownie-chasing Viking chick.” As I was bluntly told at an election-night party, that rider was not a Viking, she was a tampon. 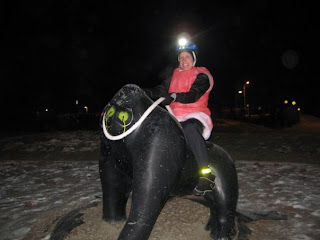 Never mess with a rag when she’s on the gorilla.
This disturbing fact was confirmed by Deb—the woman in the costume—who questioned the volume of my post-ride beer consumption. I was sober, but I have to admit that a Viking typically bears little resemblance to a tampon except in the aftermath of pillaging raid halted by unusually violent resistance. 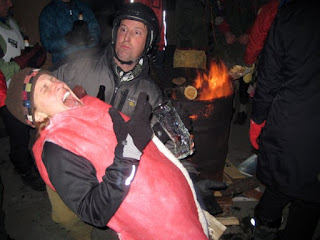 Catching a brownie in your mouth, in the dark,
is harder than you might think, even when
your entire reason for being is to absorb and consume.
In hindsight, I have no idea how this happened. And I’m still trying to wrap my head around the idea that someone who dresses as a tampon would question the volume of MY drinking, but that’s another story.

Regardless, the entire staff here at B&I World Headquarters (OK, that’s just me) regrets the error and wishes to set the record straight.

(Thanks to Akdeluxe for the Arizona pics, and to Deb for the others.)
Posted by Tim at 6:00 PM

If I had a dollar for every time I've been involved in a "sad first" for a man...

Damn, I'm a happily married guy or I'd move to Alaska and *beg* her to marry me.

Anybody that dresses up as a used tampom is A-OK in my book.

I had to revisit this post. Totally worth it.