It's an uphill battle

The line on the cover of the magazine said, “Winter Riding Basics.” I was on my way to a sandwich shop across the street from my office, and needed something to read, so I tucked the December i 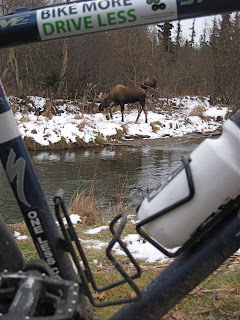 ssue of Bicycling under my arm.

I was curious to find out if the magazine’s staff actually had any tips that would be useful for those of us who ride year-round in Alaska. I realize that most of their readers deal with much milder conditions, so I didn’t expect much. I got even less.

Prepared for a chuckle at overpriced jackets and riding boots that leave wallets lighter and toes frozen, I plopped down at a table, bit into my lunch and opened the magazine to find the “winter riding” story, which was full of advice on … riding an indoor trainer.

Sorry, folks, but spinning on the hamster wheel is winter training, not winter riding. If some dumb schmo like me can ride through an Alaska winter, I’m sure a good portion of Bicycling magazine’s readers could ride all year in Pennsylvania, Kentucky, Colorado, etc., especially if they found some useful articles on how to do it.

Riding in winter is easier than it looks. Believe me, I’ve been doing it for years but still sometimes find myself looking through my car windshield at someone on a bike as I think, “Damn, that looks cold!”

Pedaling to work last Tuesday, I stopped at an intersection where a cluster of campaign volunteers were waving signs for their candidate. One of them asked me if I ride all winter, and then told me she was impressed. “I’m a wimp,” she said.

This from a woman who was standing virtually motionless on frozen concrete, in 15-degree air, at least an hour before sunrise, to wave a cardboard sign at passing cars. And she thought I was the one suffering.

If the editors of a leading bike magazine don’t get it, how can we make that woman on the corner understand?

As the light turned green, I assured her that I felt great, and was surely warmer than she was at that moment. It’s all a matter of the right gear, I told her.

From the look on her face, I’m pretty sure she didn’t believe me.
Posted by Tim at 7:18 PM

You found an actual bicycle article sandwiched in between Bicycling's Hummer ads?

I made the decision to ride through the winter a couple years ago after reading your blog (along with Jill's and a few others). Like you said, you just need the right gear and chances are, everything needed is probably already in your closet.

My neighbors may think I'm crazy when I head out in the freezing rain or snow ... but I get to work safely and, in some cases, quicker than if I'd driven. My suggestion to the curious is to just try it.

Its funny how huge the percentage of bike riders still don't get it.

Winter riding is the same as summer riding, cept' its colder and you wear more clothes.

Funny how Jeff mentions the crazy adds. I prefer the 'Adam&Eve" add in the back cover.

Not sure if I should be offended by that.....

Yeah, what's up with that ad? Don't the people at Adam & Eve know all male bicyclists are impotent from spending too much time on tiny saddles?

Don't get me started about "an intersection where a cluster of campaign volunteers were waving signs for their candidate." They would not get out of the way of the bike path nor intersections, even after yelling at them, so I had to hop and jump over icy bits of land to make it across. After getting back into cycling recently, I picked up a few mags and was not impressed to say the least.

Hey Tim,
Great post, I have to say I agree on the hamster wheel. I just can't see myself doing it. But thats just me. I feel a bit guilty reading your blog in the wintertime since we're blessed with fairly mild winters here in Victoria BC, allthough we have to deal with a lot of rain. But, at the same time I can relate since I grew up in Iceland.

I got sucked into buying that same issue. Should have at least thumbed through and given it a quick look before purchasing it.

Come to think of it I don't beleive I have ever seen a real article on winter riding in any bike rag.And I am sure if they did they would more than likely screw it up.

The Frigid Bits ice crit would be more entertaining if there was more Adam&Eve garb swapped between partners.

I bought one of those trainer things for my bike a couple years ago.....I hated the damn thing.

I'd rather ride with frozen water bottles:-)

I've done the trainer thing, but I hated every minute of it with the one exception of riding it during recovery from my shoulder surgery when I couldn't ride.

Down here in MN it has just come time to put on the studs and I am looking forward to another winter riding season where the trails aren't clogged with slow, clueless riders.