Transvestites, beer, a gay bar, temps in the teens, a brownie-chasing Viking chick, and a fleet of bikes marauding through downtown Anchorage on a Friday night. This was a scavenger hunt and burn-barrel party to remember.

It was a farewell event for The Grillmeister, and it came on the heels of a Critical Mass ride that already had a bunch of bike nuts downtown, so the crowd was big—maybe even a record for a Frigid Bits series event. Thirty-four riders took to the streets for the hunt. With more showing up for the grillin' and swillin' we had at least 50 people caught up in this shit.

I'll let the pictures do the talking. 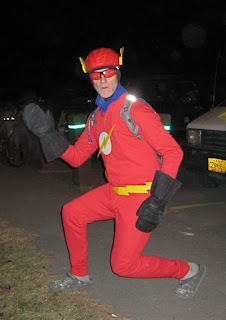 The Grillmeister busts a pre-ride move. 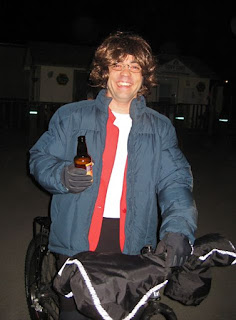 Even Gov. Palin showed up. Sadly, the stress
of campaigning appears to be
diminishing her GILF status. 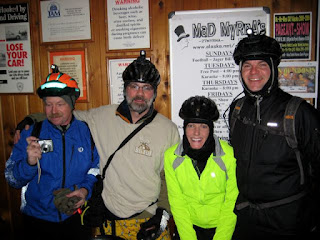 Whenever I visit a gay bar, I like to throw my arm around a guy who shows absolutely no interest in me. (Yes, a gay bar. What, you thought I was joking about the transvestites?) 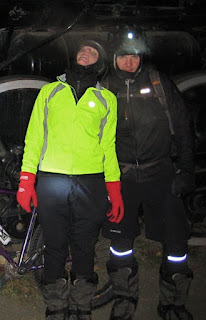 This looks like the cover shot
for a bizarre album of
gangsta rap from outer space. 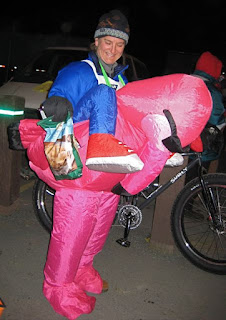 A Frigid Bits Halloween is like
Mardi Gras, without the toplessness. 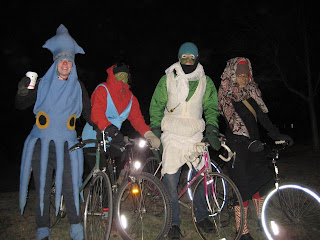 Rumor has it, there was alcohol involved. 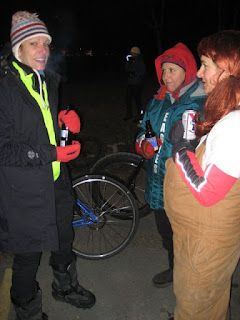 Piper? Is that you?
Nothing says class like a trashy woman
who's preggers and drinking PBR. 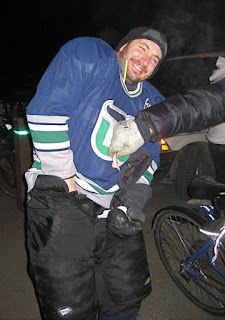 It's always hard to find when it's cold. 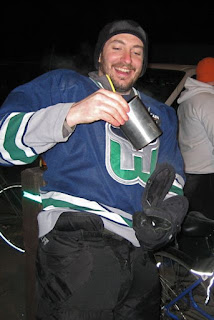 If I ever make it to AK for work, i can only hope it's during frigid bits.

Yuri, if you ever come up here for work, you just have to make sure you schedule the trip around a Frigid Bits event!

And it looks cold, Meligrosa, because it was about 15 degrees. Other than a few minutes of brain freeze on one stretch, the whole ride (and party) was quite comfortable. The beer helps.

What an awesome night that was! It was great meeting you as well! Can't wait for the next one!