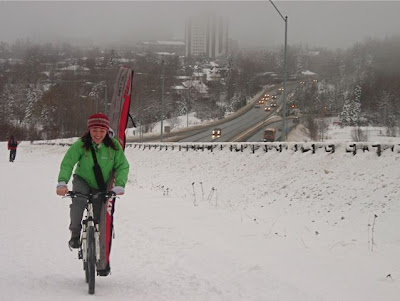 OK, so we’re a long damned way from spring, but it was freakishly warm Friday when I saw this girl hauling her skis up a hill near Westchester Lagoon. It’s always cool to see a teenager using a bike for transportation, but it’s especially cool to see a kid hauling gear on a bike and keeping a pretty smile on her face.

I shot the photo on my way back to downtown Anchorage after a ride with a new friend named Aidan, who recently flew over from the U.K. to spend a few d 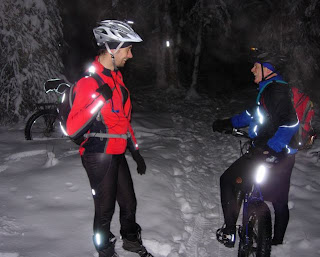 ays training for this year’s Iditarod Trail Invitational. Aidan and I split up near REI so he could stop to buy more gear, and I pedaled on to my car. By the time I loaded up my slush-covered bike and peeled off some sweaty layers, I had ridden a little more than 21 miles in a little less than four hours.

Yeah, I’m slow anyway but damn, it’s soft out there with these warm temps. All you can do in these crappy conditions is let some air out of the tires and accept the fact you won’t be making good time.

Thursday night’s ride was nasty. Hoping to show Aidan some great winter singletrack, EndoRando and I took him on a tour of some Hillside trails that hadn’t seen any real traffic since the last snow fell. For someone with Rando’s bike-handling skills, it wasn’t so bad. For a slob like me, it was a constant challenge to stay on the trail. There was a good bit of bike pushing involved, but it was only a tiny taste of what Aidan and the other Invitational racers will face later this winter.

It’s unusual when someone flies to Alaska just to ride a bike this time of year. I wanted the guy to see that we have some fun terrain, so I was bummed about the crappy trail conditions, and frustrated because I was struggling to ride decently. I was grumbling and cussing, but Aidan seemed to be having a relatively good time.

We may both be bike junkies but, given the event he’s planning to do, his idea of fun surely covers a much broader spectrum.
Posted by Tim at 9:49 PM