These are bleak days for winter bikers in Anchorage. Sure, the weather has finally turned cold again, but we’re still stuck with rotten ice and a shortage of snow left by those damned Pineapple Express winds.

The commuting conditions are fast—unless you have a deep pool of meltwater between home and your office—but most of the trails are in rough shape, and will stay that way until 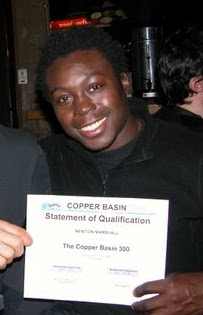 we get some new snow. The whole mess has reduced local riders to arguing online. The local forum has a long-running thread about whether the design of Chain Reaction’s new 9:ZERO:7 borrows too liberally from Speedway’s Fatback, with the counter-argument being that it’s pretty hard to build a bike that doesn’t look like another bike.

Of course, that argument keeps being interrupted by debates over things like PBR—which some people consider fit for human consumption (OK, that’s really just Dutch)—online censorship and whether the whole thing is too gay to begin with. It’s enough to drive a person batshit crazy, if he wasn’t already there from too much time on a stationary trainer.

So it was a refreshing distraction this afternoon when I read about Newton Marshall, the Jamaican dog-sled racer who plans to race in the Yukon Quest and is sponsored by Jimmy Buffett.

As I read about Marshall, I thought how strange it seemed that a guy from a Caribbean island would come to Alaska to race dogs. “Dang,” I said to myself. “That’d be like taking a bike to ride … uh … well, in Alaska. In the winter. I guess.”

I mean, seriously, where else could you ride a bike—which most of the world views as summertime transportation—that would be as weird as here? Winter cyclists should totally understand this guy.

I don’t usually follow mushing. I know people who do it, and it’s a sport with a work-to-fun ratio that’s freakishly out of balance. But this year I’ll be cheering for the Jamaican because he seems like a funhog, and he's got to be one tough dude to have made it this far.

After the Quest, maybe he’ll stick around and try some fat-bike rides. Who knows? Maybe if we showed him how much fun he could have without shoveling dog shit all week, he’d decide to stick around and train for next year's Invitational.
Posted by Tim at 5:50 PM

We went through that same wild swing here in Whitehorse. 40 degrees (C) up and then back down in the course of a week.

Fortunately, the day the temps dropped we got a dump of snow and fixed everything up. Bye-bye ice.

Hope things improve over there soon.

So, I've officialy switched to an equally crappy beer just so you and the Grouch will quit making fun of me. Living the High Life!