Walk on the wild side

A week into my singlespeed experiment, I was staring at the minimalist drivetrain on my Stumpjumper while removing my shoes a couple of days ago. How would I explain this behavior when confronted with the question my wife had a 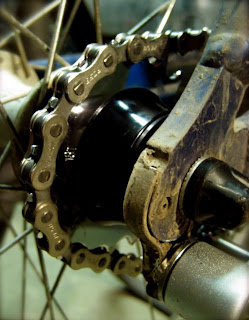 lready asked: “Why would you take the gears off your bike?”

I was partially motivated by the lure of increasing strength, and minimizing bike maintenance during the season of sloppy springtime commutes. But mainly, I felt like I should expand my horizons by sampling the singlespeed subculture. Mountain biking is the closest thing I have to a religion, and I’m interested in all of its various factions.

In the Church of Cycling, singlespeeders are the fundamentalists. You see, fundamentalism has been described as “strict maintenance of ancient of fundamental doctrines of any religion or ideology.” And what could be more ancient and fundamental than a bike with only one gear?

Most SS riders are devoted to the cause. They often hold their own races and festivals, separate from those of us in the multi-geared world. They proselytize. They are definitely a nonconformist sect. Heretics, if you will.

In the interest of solidarity and self-improvement, I have opted to dabble in their unorthodox practices. But I remain orthodox at heart.
Posted by Tim at 7:27 PM

Email ThisBlogThis!Share to TwitterShare to FacebookShare to Pinterest
Labels: singlespeed

For winter commuting I did the same thing for eerily similar reasons. And I think I am going to keep the mountain bike as a single speed.

But here in Minneapolis we have like 7 hills. So a single speed isn't ever going to be a serious problem.

Now the folks on the fixies...

Oh, yeah. Fixies. When I said I was interested in ALL the factions, I was forgetting those crazies.

I, myself, love fixed-gear mountain biking. It's slow, particularly on the downhills, when compared to freewheeling but there is something perversely entertaining about it as well.

as long as you don't start speaking in tongues or playing with snakes...

"...what could be more ancient and fundamental than a bike with only one gear?"

Well there's the Dandy Horse if you want to be really silly, or the p-far for the more discerning.

What bike and gearing are you running? Looks like an 18t out back? What parts did you use to convert to SS? Still having fun on my SS!

Be careful ... you start out by dabbling with the single speed, and then one of your friends asks if you want to try some fixie.

"Sure," you'll think to yourself, "I will just try it for a few turns of the crank. I can always go back to coasting afterwards."

I am just saying, in case you didn't already know it ... single speeds are the gateway drug! Be forewarned!

Jordy, the bike is my old 1996 M2 Stumpjumper frame, which has had every part except the seatpost collar replaced two or three times by now. It’s a commuter and ice bike, so I dumped the front suspension and I’m running a Surly Instigator fork so that I don’t have to worry about cracking seals at -20.

The crank is a Shimano triple I’ve been using for a couple of years. I just removed the granny gear and big ring. I’m running a 32-tooth Salsa ring up front, and an 18T in the rear on a SS conversion kit I picked up at Paramount (I can’t remember the brand). Once I loosened a tight link on the new chain, and reversed the Surly Singleator to push up instead of down to create chain tension, the thing ran like a dream.

I’m open to enjoying one bike as a singlespeed – especially on my flat commute -- but there’s no way I’ll give up gears for trail riding. Gears work. It’s that simple. I disagree with anyone who says they require too much maintenance.

As for singlespeeds being the gateway drug to fixies, Gemils, I’m 45 years old and have too much invested in surgical knee repair to ever start screwing around with fixed gears. That’s for the younger guys (who will also end up with shitty knees at 45).

I rode a fixed gear bike every winter when I lived in New England where the hills were short and small. Here in the mountains of Colorado, I cannot even imagine riding a SS or a fixie... but a few people do it. For me, one reason that I can't even try it is that my spine is already falling apart - and lugging a single gear would be bad news.

Good luck with your experiment. I hear that it's not too hilly where you are so you may love it!

So does this mean that your also going to be participating in the bike tossing events?
That is what happens to SS Addicts...

No, Amber. Manny didn't build this bike, I did. So it actually works!

You're not missing anything with the fixed gear faction. My fixie is sitting in pieces between the garage and the shed. However, it will be resurrected for the ice crit at the end of January. If there's one thing my fixie's good for, its blending in with the freak show that is the Frigid Bits.

By the way, thanks for the write up a few posts back.

Due to a broken freewheel, my single-speed winter bike temporarily became a fixed-gear bike...

Enjoy your "Walk on the Wildside" Tim. You'll love the simplicity!
I'm heading up to northern Minnesota today for a couple days of winter fun. I'll be on my old Stumperjumper
single speed. I love it!