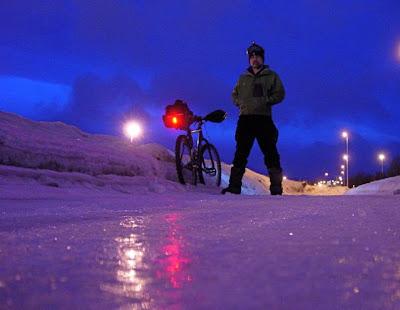 Rush hour on the C Street bike path, 5:25 p.m.
Traffic congestion is for suckers.
My office was still dark, and I was changing clothes when my phone rang Wednesday morning. Instead of saying “hello,” the caller simply opened the conversation with, “Did you ride your bike this morning?” It was a staff member calling in to report that she didn't know when she would get to work after a night of freezing rain had coated the Glenn Highway with a sheet of ice.

It was 32 degrees outside, and the rain was still coming down. All over town, cars were stuck and/or colliding with one another on the icy roads. Schools were closed. The university was shutting down. The city was suspending public bus service. A major local freight company was sending drivers home canceling all deliveries for the day.

A few minutes later, after I’d opened my door and window blinds, another woman arrived at work and poked her head in before going to her desk. “Did you ride your bike today?!” she asked.

Other riders were facing the same bewilderment among co-workers all over town. I started a “roll call” thread in the commuter forum at akspokes.com to ask who had ridden to work, and then watched the responses come in:

Amber—“I had to laugh at the people attempting to drive. I felt MUCH safer on my bike.”

Jordy—“I was glad I rode, traffic looked like hell. Everyone @ work was just shaking their heads.”

Ajofatbike—“I think I was going straighter and faster than most of the cars.”

BikeMonkee—“I felt much safer on the bike than trying to negotiate all the traffic hazards.”

What were drivers talking about when they arrived (many of them late) to work? Stress, sliding through intersections and how many cars they saw in the ditch.

Jeanne said...
This comment has been removed by the author.
5:44 PM

Jeanne said...
This comment has been removed by the author.
5:59 PM

(I'll get this right yet...I was logged in as my alter-ego from the elementary school)

Great post -- people at work ask me if I'm still riding. Granted we're skiing more than riding these days, but when I tell them we were out a week or two ago to get groceries they're a bit incredulous. During the last snowstorm I was cursing having driven in when I'd have been home faster had I ridden.

I agree that I feel like I can control my bike with studded tires on ice better than I can control my car. However, what scares me is whether one of the out-of-control cars will take me out when I'm on my bike. I had an oncoming car start skidding and losing control one morning last year. Fortunately, she managed to ditch the car off the road on *her* side of the road.

For this reason, I do think twice before heading out on my bike when the roads are really bad.

Remember when you were a kid, and your parents said to get out of your Sunday school clothes before you started playing? And you didn't listen, and they got ruined? Riding around in your $30K car in an ice storm is the same thing. Be as careful as you want, but something is going to get ruined. I'd much rather be on a bike or on foot!

Damn I guess we have it easy here in Miami!
http://fixedgearmaniacs.blogspot.com