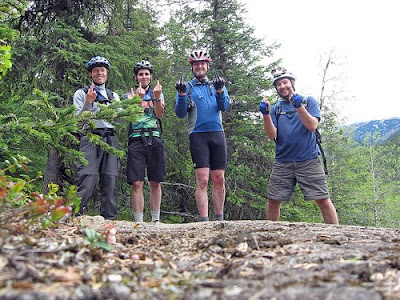 Is this any way to treat one of the top 50 cycling blogs in the world? I think not.

But it’s what came out of last weekend’s mass assault on Russian Lakes Trail after our group of 10 riders split into two end-to-end trios who did a car-key swap in the middle of the route, and these four clowns who did an out-and-back ride from the Russian River end.

When they weren’t flailing themselves on rocks and logs at all the technical sections that I safely (i.e., sheepishly) stepped over, these guys obviously had time to practice their sign-language slang and create the newest entry in the esteemed Bicycles & Icicles Finger Hall of Fame.

Speaking of fame, London Cyclist has named this pimple on the ass of the Internet one of the top 50 cycling blogs in da world.

No. 36, to be exact, thanks to “a number of elements such as Google Pagerank, Twitter Rank, Alexa Rank, number of comments and Technorati Authority.” I don’t even know what all that means, but it sure sounds important.

Something tells me that if they analyzed blogs written by people whose friends like to flip them off, I could move up about 35 spots in the rankings.
Posted by Tim at 12:03 PM

Email ThisBlogThis!Share to TwitterShare to FacebookShare to Pinterest
Labels: Russian Lakes, the finger

you missed one... from the herning trail ride back in december. though in fairness it was never officially decided wether it was more for you, or for me leading them up an absurdly big hill for no reason....

That's a great pic! I can't believe I never saw it before.