Today I lived through the torment and humiliation of childhood bullying. I watched maniacal, ventriloquist songbirds murder a redneck with a sh 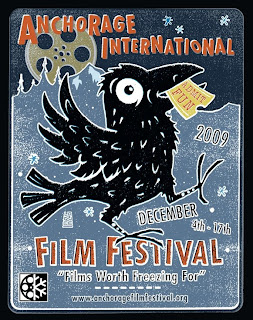 otgun. Then I shared in several minutes of loud, horrific marital strife that ended badly. I even saw the specter of Death convince an angry, homicidal little girl that she really appreciated and loved her neglectful mother.

Then Death drove a toy through Mommy’s eye socket and into her brain, just to make sure that evil little bitch felt proper remorse.

And that was only the first two hours of my initial Anchorage International Film Festival experience. I won’t even get started on the event's excruciating master of ceremonies.

Fortunately, the finale of the AIFF’s “Martini Matinee” was Carl Battreall’s documentary Fat Bike, which provided a nice reminder of how snow bikes can bring joy to a dark and weird world. Best of all, it was clear that a huge portion of the audience in the Bear Tooth theater was there mainly to see Fat Bike.

It looked great on the big screen, and the audience was justifiably impressed not only by Carl’s work, but also by the tenacity and toughness of the stars: Susitna 100 racers Mike Morganson and Josh Morehouse, who were in the back of the theater chowin’ down on pizza and beer.

I’m not sure that’s a good training diet, guys. After all, the 2010 race is only a couple of months away.

So is there a way for us non Alaskans to view this wonderful piece of art?
Thank you for your time!!

Thanks, Joboo. I just added a link to Carl's web site for anyone who would like to order a copy. It's supposed to be available for download at amazon.com, but Amazon screwed it up. Currently, the video they have is squeezed from a rectangle to a square. If they get it fixed, I'll post a note on my blog.

And... Fat Bike did win a special award - it tied with A Beautiful Journey for Best Snowdance film that captures the Alaskan Spirit.

It was fun to see so many bikers at the screening. Jon & I get a pass every year and OD on films & events. Tony, the founder, was the MC on Friday, Day 8 of the fest. I imagine that's why he was kind of rambling...