Value? Not if you ride a bike.

I always like shopping at businesses that make an effort to accommodate bicyclists. I even love bragging about them here on the blog. Conversely, I’m always disappointed in businesses that treat me like a second-class citizen if I don’t arriv 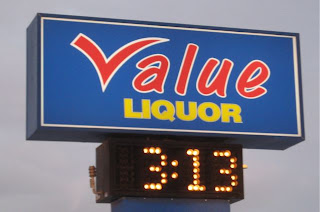 I’ve been a customer at Value Liquors at Klatt Road and the Old Seward Highway since the place opened. The place is clean, has good prices, and is locally owned. Most of the time, I’ve arrived there by car, because it’s close enough to my house that I drive by regularly—and who really wants to carry a 12-pack home on the bike if they’re driving by anyway?

Unfortunately, the place has never installed a bike rack. A few times, I’ve rolled a bike just inside the door while picking up whatever I needed for a weekend, or a party just up the hill at the MacHuber manse. It was never a problem.

But last Wednesday, after I carefully leaned my Pugsley out of the way just inside—taking care to keep the tires on a rug so my tires wouldn’t drip on the floor—a surly employee la 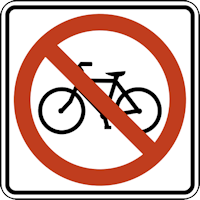 unched into me and demanded that I never bring a bike inside again. She ranted about it being inappropriate and unsafe. (It’s just a bike, lady, not a bomb.)

The manager backed her up the next day. Just can’t have bikes inside the stores, he said. As a reason, he cited a recent incident in which when a drunk guy tried to ride down an aisle inside another Value Liquor store.

Sorry, but as far as I’m concerned, that was an inebriation problem, not a bicycle problem.

I’m sure drunks stagger in trying to buy booze all the time, but I doubt the manager’s ever tried to ban walking. If you don’t want obnoxious drunks in your business, you throw them out. You don’t blame the inanimate object that got them there.

I’ll miss the convenience of shopping at the “corner store.” But Costco, Fred Meyer, and Brown Jug stores all have bike racks.

They aren’t locally owned, but they don’t treat me like a bum.
Posted by Tim at 8:12 PM

Same deal here with the local wallyworld. 1st year it was open, they let me bring my bike inside and park it at the customer service area. A year later, it was like I had an infectious disease or some damn thing.
The manager was quite the A-hole about it too.
Needless to say nor I or my family shops their anymore.
On an up side, the beer store I shop at looks at me funny when I walk in without my bike! Go figure??

Agree with Joboo.We have a retail camping store and even offer free chains to lock the bikes while they are in store. Guess what, they come back

My local Wells Fargo branch doesn't allow bikes in the drive-through and when I explained to them that in MN bicycles are classified as vehicles with the same rights as cars and they couldn't deny me service. The teller sited safety as the reason but since I had just ridden 20 miles in rush hour traffic I explained how much safer I was in the drive-through lane. They did end up serving me but said they wouldn't do it again.

This is all very interesting. My favorite local bike shop has a liquor
store right next to it and we often times pay our favorite wrench with a 12-pack of his favorite. So for me it's three for one deal. Not only do I get a bike rack, but I have access to beer and bikes:)

As life would have it however the bike shop is moving to a new location. Maybe the liquor store will follow.

Other than this I feel like my town is not a bike friendly town. Not enough bike racks and too many soccer and hockey moms driving in a hurry with cell phones stuck to side of their heads.

College Village Brown Jug is happy to let you park your bike inside.

My only conflict there was when some fixie bastard parked his bike in "my spot". Turned out to be FixiePaul - and he flatted twice on the way home - talk about big karma...

I like that you made the imaginary assumption that a drunk walker wouldn't bother the manager, but the drunk cyclist did.

The Brown Jug on N.Lights & Spenard lets me bring my bike in...and I know it's a haul if you're on the southside, but LaBodega on Old Seward at the UC is the best.

Great blog. I really dig it. Thanks