Contributions to the venerable Bicycles & Icicles Finger Gallery have come from many places, but this one boldly goes where no one has gone before: under water. Gina spends a l 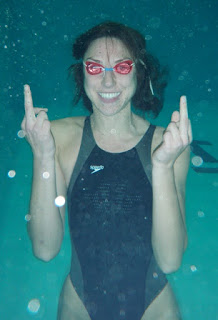 ot of time submerged because she’s one of those odd people who thinks bikes are fun to use in triathlons. When she sent this shot, she asked if it counted even though she’s not wearing cycling clothes.

Of course it counts. It counts because A) I’m a liberal guy who doesn’t discriminate (well, not openly anyway) against people who swim and run, and B) she’s flipping me the bird under water, which just doesn’t happen every day.

This isn’t Gina’s first appearance in the Famous Finger Gallery. She was part of the international incident last September when a gaggle of Brits, Welsh, Italians and Frenchmen were hijacked into flashing their phalanges.

I’m proud that Gina was able to take it to a new depth. Because, after all, that’s really what this blog is all about.
Posted by Tim at 12:01 PM

Email ThisBlogThis!Share to TwitterShare to FacebookShare to Pinterest
Labels: gina, the finger