Dollars down the drain 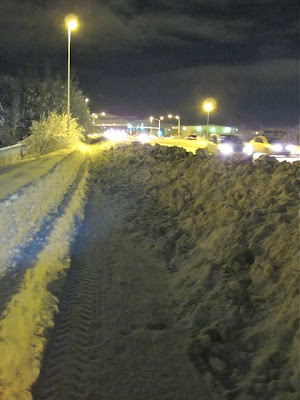 Alaska snow removal: Plow. Bury. Repeat.
About a dozen years ago, morning commuters in Fairbanks noticed a crew of workers clearing a parking lot with snowblowers. That afternoon, they saw the same workers blowing the same snow to the other side of the same parking lot. This went on for a couple of days while outraged drivers — who didn’t know the parking lot had been rented by a snowblower manufacturer to test its product — were calling City Hall to complain because they thought municipal workers were wasting taxpayer dollars.

Maybe those motorists paid attention because the scene involved a parking lot for cars. Something was going on, because the same basic thing happens in Anchorage all winter, every year, and nobody seems to give a damn. I’m talking about sidewalks and bike paths that city crews clean, and that state crews then bury under snow thrown from adjacent roads. Over and over. Every damned year.

And yes, I find it annoying because I’m a bike commuter, but it goes beyond that. It’s a terrible waste in terms of labor and fuel costs, because the sidewalks and bike paths that do actually get plowed (rather than completely ignored) end up being cleared twice. Eventually.

In the meantime, people who walk, bike, take the bus, etc., are lucky to find clear routes for a couple of hours before they have to spend days post-holing through a moonscape of ice and snow debris that was thrown atop their travel routes and bus stops. At least I can get off my bike one or twice every block, and grumble as I push through 75-yard stretches of snow sludge. I feel worse when I see people running their wheelchairs at the side of a lane of traffic, or people with canes trying to get home with bags of groceries when they can barely reach a bus-stop bench.

The cause of this problem is simple: The city of Anchorage and the state of Alaska are incapable of coordinating their snowplow schedules to work efficiently.

When this kind of government waste is more visible and affects more people, it sparks outrage. But when it’s in the dark margins beyond the side windows of most peoples’ automotive cocoons, they don’t seem to notice.

Maybe when somebody in a wheelchair gets run down on a dark December day as they roll down an icy street full of cars, we’ll finally be able to get our mayor and our governor — who are both tax-hating, cost-cutting conservatives — to appoint a couple of managers to work together and end this insanity.

I had to push my bike down Old Seward today, IN TRAFFIC, because there were no sidewalks (thigh deep snow) and no shoulder and it was too slick and dangerous to ride. It's been days since it last snowed. Some sidewalks are cleared but then they just....end. Really lame showing from state and Muni.

I also want to publicly apologize to the man in the black SUV who took 30 seconds of his life to stop in the middle of the Old Seward/Dimond intersection to scream at me because he had been delayed 0.5 seconds by my brazenly crossing the road when I had a green light. I'm so sorry I caused such a disruption in your Very Important Day, SUV driver!

I would hate Anchorage if it weren't for the fact that it's in Alaska.

We have the same issue here where I live. However, we have no snow as of yet this year so it hasn't been an issue.

I don't know who does the %#$@ing planning, but they did exactly the same damn thing.

Tim, do you really think that someone getting run down in a wheelchair from the lack of clear sidewalks would cause the mayor or governor to wake up and realize they need to work together?

No. Like bikes, wheelchair users have no right to safe travel passage because they are not paying taxes. At all. Ever. They are, like cyclists, are freeloading, self righteous loudmouths who advocate for "equal rights" and "equal access."

Phooey, I say. If they ain't in a car, they ain't got the right - cyclist, pedestrian, or wheelchair users. Get a car you hippies. That's what I say. Get a car.

aktrir said...
This comment has been removed by the author.
8:01 AM

It's not as easy as it seems on the surface. Yes, they could probably do a bit better, but what do you want them to do, wait until the roads are fully plowed so they only plow the sidewalks once? Also, how do you coordinate things when you have road plowing equipment that moves much faster than pathway clearing equipment. You have road that will have no adjacent pathways (at least none that are close enough to be filled in by road plowing) in one area, then another stretch with only one pathway on one side, then other stretch with pathways/sidewalks on both sides. How do you handle it when they make multiple passes on the roads spanned over many hours or even a day apart (inital quick plowing, then a follow up, more thorough plowing). You also have a mix of muni road crews and state road crews, each with priorities as to which roads get taken care of first and they aren't always in the same area.

Don't get me wrong, it would be great if there was a way to coordinate the two operations, it just isn't as easy as some seem to think it should be.

I guess you could tell the road plowing crews to wait for the sidewalk eqiupment to get there, then slow down to it's pace anywhere there is a sidewalk/pathway. After the reactions over not getting the roads cleaned down to asphalt within the first hour after the snow this last weekend, slowing the plows down more will surely fly....

I had this same situation on the Mendota Bridge on my old commute except they never really re-cleared the bike path. Shame too since it's the primary (nearly ONLY ) way across the river; alternatives add 7-10 miles.

My new commute (hallelujah!) is on a trail not near any roads. First Bike Highway in the USA. It's one of the reasons why Minneapolis has so many year 'round commuters.

Yesterday, I watched a DOT grader in the middle of the day shoveling the left lane of C-stree going north bound, simply shoveling all of the snow into the right hand lane (about a 1-2 foot high furrow)....and leaving it there. No other grader to get it off onto the shoulder or bike path.

I wanted to scream.

It is my observation that although the snow has been a bit more fickle this year, the problem appears to be the state-maintained roads, not the muni's. It seems that many of the muni side streets are cleared long before (in some cases days) bfore the state-maintained arteriee (specifically, east Northern Lights, Muldoon Road and DeBarr). Last week was the first time ALL YEAR that you could get from Baxter to Boniface on the sidewalk (and it is covered up again). They actually shoveled to a bus-pullout and stopped such that you had to stand in the road where the bus would be to wait for it.

Regardless of you plotical opinions of the current Muni administration, I think the problem here is DOT.