I was eating some pasta and flipping through the new issue of Bicycling magazine today when I came across a fun feature on things to love about cycling. They nailed quite a few, like the sound of everyone’s derailleurs shifting when the pack crests a hill, the satisfaction of getting down in the drops 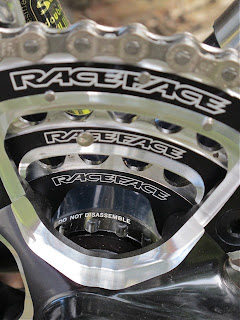 and grinding through a headwind, and learning to appreciate the beauty of frame scratches and paint wear.

But there was one thing to which I couldn’t relate: naming a bicycle. I’ve never been interested in doing that.

Don’t get me wrong. I love my bikes. I get attached to them. Probably too much. I’ve ridden some for years past the point at which I would have benefited from switching to newer technology. But at the end of the day, they’re machines. Fascinating, beautiful machines that are engineering marvels, but still just machines. I don’t assign animate qualities to them, and the idea of naming them seems rather silly.

After all, they come with names that I use to refer to them around the house or with friends. Epic. Fatback. Trucker. Road bike. (OK, that last one is a bit dull, but TCR C1 is just too much of a mouthful.) Giving them new names seems unnecessary.

Is this a gender-based thing? Most people I know who have named their bikes are women. Maybe the men do it, but are shy about admitting it.

So I’m asking those of you who read this blog: Do you name your bikes, and why or why not? I’m truly curious. So leave a comment if you have a spare minute, and identify yourself as male or female, if you don’t mind.

Naming bikes, yes or no?

Five bikes...Names as follows: Roadie, Townie (or effectionately known as "old roadie), El Mariachi, Flight (or "the blue one"), Pugs (aka "FAT Boy" or "The Bat Bike")

5 bikes at the moment, none of them have names unless 'drinking bicycle' counts, even though it's more often used for getting to work. hmm.

I have "The Commuter" and "The Orbea." The latter is said with a soft, warm pride. :)

One bike, no name. If pressed, I refer to her as my lovely. Or sometimes Sweet Thing. But mostly just "the bike"

I didn't intend to name them, it just happened. (Female, obviously.) I also took the liberty of naming my husband's gold-colored Fatback. Ginger.

On account of the fact that ride as fast as I can, I can't catch him- he's the Gingerbread Man.

His other bike is a Surly Troll. I've yet to meet the person who can improve on THAT, when it comes to naming conventions.

I don't name my bikes, but I know people that do. Most are women that have a lot of bikes. I think it's that nurturing gene that we're supposed to have. I don't have it.

Sometimes I call my bikes names when I'm trying to fix them, like "piece of shit" and "bastard child", but that's different.

I don't give mine names. Unless you count "The Blue Truck/Xtracycle" as a name. The other four I refer to using their model names mostly. The Surly Long Haul Trucker is the "LHT", the belted custom Surly Cross Check is the "Belt Check", The Surly Pugsley is the "Pug" or the "Pugsley", and the custom Ellis road bike is the "Ellis".

I have three bikes; only one has a name. The fatbike got named Sheba after its Graceful Fat Sheba rims.

My wife has two bikes. She calls her road bike "The Camaro" and her hybrid bike "The Prius."

Several bikes, but no names. I identify them by use (touring/commuting, 26 hardtail, 26 full suspension, 29er SS, etc.)

My bikes' names always seem to come from others, never from me. There was Lavender (named by a girlfriend), which eventually broke in half. Later I built up two old rusty frames. One was blue, the other purple. Someone said they looked like a pair of old grandparents, so the names grandpa and grandma stuck. Grandma died a slow and painful death. Grandpa is still riding really well. But every time I try to name my own bikes, it just sounds so contrived and artificial. A bike's name must be earned through time and use.

No names, ever. Make or model name usually does it. The 29er sometimes gets called "the 29er" or the "big wheels", and as the granddaddy of the stable, the Basso is usually the "ol' yellow Basso", but that is as far as that goes. The reasoning is the same as your own - never felt the need to name any inanimate objects, bikes included.

Don't think I've ever named a bike. Right now I've got four, with informative names like 'the 29er', and 'the LHT'. Female.

If you need help naming your bike, I'm availbe :)

Female...but kind of a butchy female so I don't know how that fits in to the statistic.

NIcknames is as close as I come but my partner names most of them. The FatBack is just the FatBack, at least so far...

@Titanium: ALL FatBacks are gorgeous...

I named one bike, Edward Cullen, becasue I gave it a sparkle top coat.

I'm a guy. It also seemed silly to me to name my bikes, although I don't knock others for doing so. I love my bikes and I look at them as an extension of myself, so it just didn't seem right to name them. I have several bikes, usually refer to them by their model names like "the Switch" or by what they are "the singlespeed".

Male. I call my bikes, the trek(sometime referred to the fuel),the fatback, the road bike, the rock hopper, the old road bike(or the winter beater), and the rx1.

Male.
The first four adult bikes I had, I named after a mount from the Lord of the Rings series; Fatty Lumpkin, Asfaloth, Bill the Pony, and Oliphaunt. I guess that I named the Fatty because I'd been in the habit of naming cars, and Fatty replaced my car for a while; plus Fatty Lumpkin is an awesome name.
But I no longer name cars or bikes, and the most recent two bikes are just "the road bike" and "the cruiser." Just lost interest in the practice, I guess.

Stella=mtb (again, I think this would apply to any mtb I own)

The Fat Lady doesn't have one yet.

I tried naming others, but names just didn't stick.

I'm late to weight in here but what the heck.

Female. Three bikes. Two have names, the third only sort of does. The name has never really stuck.

My mountain bike - a Giant Anthem. Her name is Bea (short for Beautiful)

My snow bike - a Salsa Mukluk. His name is El Guapo (because he is so darm good lookin' and the Spanish for the salsa)

My "road" bike - a c. 1990s steel frame custom something or other Vitali). Her name is Jemimah (after the puddle duck because she is teal coloured). But this bike is more often just "my road bike."