Other than a pair of fenders I used to run on my old commuter bike, I've never owned any gear from Planet Bike. Based on this bottle cage, I'm not sure I ever will. 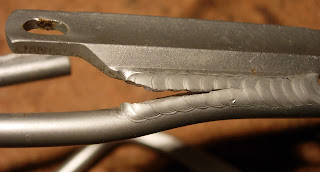 My daughter's best friend had her bike in our garage over the weekend, so I decided to install a new bottle cage to replace the broken one that she's had all season. When I looked closer, I found these weld failures. What the hell are they building these things with? Silly Putty? Chewing gum? 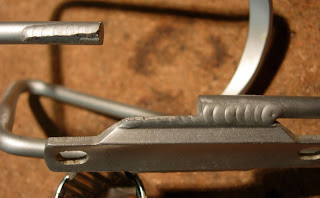 If this thing can't handle a 13-year-old kid riding around the neighborhood, how long would it last on a trail? The welds came apart on both sides. Shitty products tick me off.

Want a bottle cage that'll last? Buy a Blackburn Mountain Cage. It's cheap, reasonably light, and damn near indestructible. I've never managed to break one. I have them on at least three bikes, and I've forgotten how old some of them are. The only rig I don't use them on is my road bike, which I felt just had to have carbon-fiber bottle cages.

Because, after all, it's easier for a chunk like me to buy a lighter part than it is to pass on that extra slice of pizza.
Posted by Tim at 8:33 PM

I like their fenders, I'm sure that if they knew you were having a problem with the cage, they'd replace it.

Wonderful blog, Tim! Thanks for your comment on going clipless. I know the first fall is just around the corner :)

That sucks. I'm running 3 pairs of their fenders on my bikes, and I've got one of their uber-bright headlights that I've been very happy with for over two years. Can't say I've tried their cages, but that is pretty pathetic. It doesn't seem like a piece that would be too difficult to get right. I've bought many no-name el-cheapo aluminum cages and not once had issues like that.

I have a Planet Bike shock pump that has been reliable to date.

Who knows? Maybe all bottle cages are produced in the exact same factory in China by the Ching Wu Lee Corp., and differences in quality are in the mind.

I have a friend who spent $40 on a carbon fiber bottle cage. I haven't reached that level yet.

I just met a fellow commuter last night that had a broken Blackburn rack only about a year old, so I don't think it's fair to write off a company for one product failure. I'd say email them and judge them by customer service and their warranty (unless there are lots of parts breaking.) I'm no expert, but that break suggests dirt contamination, doesn't it? Personally, I always buy King cages. Stainless steel and built to last.

Oh I've been past th 40$ carbon fibre bottle cage. That's like the automatic sunroof on your car: you figure after paying that much for the car, you might as well go and get the whole deal...
The bottle cage weldings suck anyway - but don't forget, sometimes kids are hard on gear. In a way we can't imagine until we see it. *G*