I came across The Question the other day. You know, the one that pops up in various forms in questionnaires and discussions among people 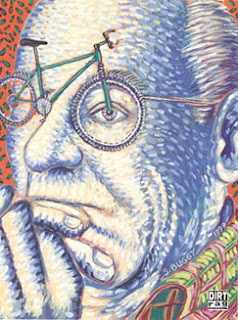 who ride: How long have you been a bicyclist?

I’m never sure how to answer that question. What makes one a bicyclist, instead of just a person who rides a bike? In the alternative universe of my mind, I have some vague guidelines for what makes me think of someone as a cyclist. My little rules seem to involve some nebulous combination of experience, skill, equipment and whatever else I’m in the mood to include on a given day.

So when I tell someone I’ve been riding for 18 years, I’m counting only the time that has elapsed since I bought my first decent bike as an adult, and then started commuting to work and learning about singletrack on weekends. Somehow, that doesn’t seem right.

What about all the years I spent as a kid getting around my hometown on a bike—riding to school, my dad’s store, friends’ houses, and the city swimming pool every summer afternoon? What about all those boring evenings when I’d tell my mom, “I’m going for a ride,” and then spend an hour or two aimlessly pedaling around after dinner?

What about all the times as a teenager when I climbed to the top of the hill outside town just so I could scream back down it on my old Raleigh 10-speed? (I’m still grateful to my friend Don for never running over me when he’d chase me down to clock my speed on his car’s speedometer.)

Those things should count too, shouldn’t they?

Maybe we’re not really “cyclists” until we start asking ourselves existentialist questions about when we became cyclists.

Or until the first time we pull on a pair of Lycra shorts containing a big gob of chamois butter and then say, "Whoa! What would happen if I farted right now?"
Posted by Tim at 8:20 PM

Email ThisBlogThis!Share to TwitterShare to FacebookShare to Pinterest
Labels: bicyclist

Ok so this made me laugh. There I was, reading along, lingering over every word, asking myself the same deep question of when it was that I crossed the threshold to cyclism, and then, at the moment when I'm fully engrossed and expecting an insightful answer, you play the fart card. Such a guy. The fart card?

As much as I hate to admit it, I laughed. I did. At a fart card.

I think you have to go back to when you first learned to ride. That was seven for me, and I can remember the moment vividly. I pleaded with my dad not to let go of the back of the bike, but finally realized he hadn't been holding on for a while. Shocked that I was riding by myself, I decided to crash.

My point is, is that all the skills I have today are the results of years of trial and error. Many of my basic off-road skills were learned before I even owned my first mountain bike. I was fascinated by BMX bikes growing up. We lived on our BMX bikes all summer when school was out.

So maybe it's when your love of the sport began...