A few years back, I stopped tracking my annual mileage. My bike computers were freezing up in cold weather anyway, so I decided to spend a wi 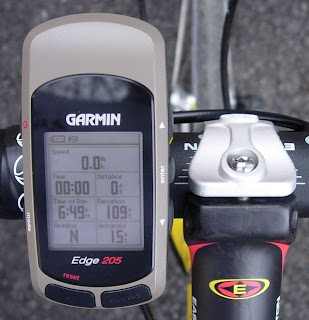 nter without one. It felt good to enjoy a bike without pursing week and monthly distance goals.

Since then, I’ve used computers to monitor the distances of individual rides, but I’ve purposely avoided tracking my accumulated mileage by season or year. In some ways, it has been liberating.

But it has also made me slower and weaker.

Looking back at this Summer of Suckage, it isn’t hard to figure out where the problem lies. I’ve spent too much time simply enjoying the feel of pedaling. Too much time taking the short routes. Too many rides enjoying a chat near the back of a group. Too many post-ride, barely earned beers. In other words, I’ve been lazy. And it's making me soft.

For cycling to be really fun, it sometimes has to hurt. I can’t remember the last time my wife or daughter said, “Have a fun ride,” and I replied with, “Not this time.”

I’ve never truly trained in any methodical way, but my best summers have always included a lot of rides that sucked because they were hard by design. I knew before I left the house that I was going to suffer, and that was the point.

I’m going to take a few weeks off this fall after getting an injury repaired, but then it’ll be time to get off my ever-expanding ass. I need to ride longer, harder and smarter. The computer needs to come back out, and the gut needs to go back in. The summer of 2009 shalt not suck.

I recently heard someone say something that made a lot of sense:

It’s time to toughen up, Buttercup.
Posted by Tim at 8:27 PM

Sounds like someone has to get a stationary trainer AND a personal trainer. Maybe you'll turn into one of those CTS skinny guys who never drinks beer. I can't imagine you any more grumpy than you already are...

I have a stationary trainer. I just need more discipline. It doesn't take a CTS coach to tell me what I need to do: Eat less, ride more.

Hey, you could have a fitness challenge... I know I now feel inspired to break out the new trainer we bought last winter and check the Pilates studio schedule. Way to go!

Count me in! As soon as these damn feet heal I need to get back on the same track.

I'd challenge you, but somehow I think I'd get the short end of the stick.

Wow... Tim, I read both your blog and Jill Homer's. I absent-mindedly clicked on your blog, but thought I had clicked on hers. I read this post and thought that Jill was being waaaay too hard on herself. I think I missed the part about the wife or daughter.

Not tracking her miles? She tracks them daily.

Ever expanding ass? Umm. Not a problem for her.

That was weird. I need to pay more attention to where I click.

I just started tracking my riding and am having lots of fun doing it! Using a bar mount w/ a Garmin LegendC. Sounds like we all are in for it in 2009!

hmm.. sounds like you need some new fast friends

well i have computers on all of my bikes. the '52 schwinn even has a speedmeter on it that might weigh as much as a set of cranks(but when this bike starts out @ 60 lbs plus w/out accessories who's counting gram/pounds. it's all about the cool factor!)i know that even w/ riding w/ new people in new places i still did not get out as much as i did last year! that sucks!! yes, something needs to be done for '09.

Almost sounds like a pledge to do the Soggy....solo.

I hereby vow (as I have many times previously) to NEVER attempt the Soggy Bottom as a solo rider. That's just madness.

As for the approval of messages, I do it only to keep a particular wingnut from posting senseless, angry rants. He doesn't even have enough sack to use a name.

I don't like having to approve comments, but I have to maintain some standards here, and this chickenshit dude is way below them.