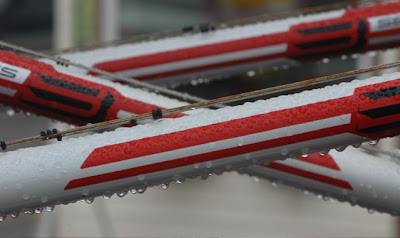 I'm visiting a small town in a rainforest this week. Moss grows everywhere, low clouds drape over the mountains and mist frequently fills the air. But moisture isn't used as an excuse.

The coastal terrain is fairly gentle, and the maritime climate is relatively warm. People wearing jeans and fleece jackets cruise home from work on bikes with fenders and rainproof panniers. Senior citizens with gray hair pedal up hills without getting off to walk.

Yesterday, a 50-something man in rubber boots and a camo hunting jacket was riding downtown when a friend saw him and said, "Taken to riding your bike, huh?"

"Well, it's cheaper," the friend said with a smile.

"It's exercise, too," Camo Man said as he continued rolling down the street.

It was a beautiful thing to see.
Posted by Tim at 8:00 PM

I recently went on a 3-week bike trip around the Canadian maritimes. It rained pretty much solidly for the entire trip.

When my bike-partner and I went to the bike store after the ride to get a tune up, the techie wrote this bike is not an amphibian' on my bill.

And I'm waiting for this water to turn into snow!!! I started riding more, because it is cheaper and there's the exercise as well!