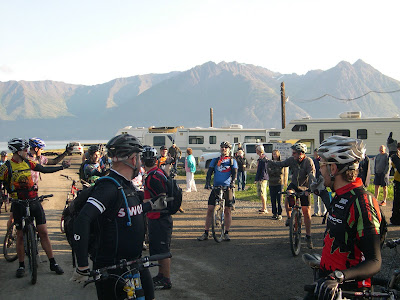 Some may have meant it more than others.
(Thanks to Maura for the photo)
The Finger Movement lives on!

Just before the start of Saturday's Soggy Bottom 100, event organizer Carlos Lozano asked the entire field to flip me the bird. Not everyone fit in this photo but, trust me, it was the greatest Mass Flip-off I've ever seen. (And it took some doing to match Jeff's effort earlier this summer.)

Most riders didn't even know why they were flipping me off. I mean, it's not like this is a request one hears every day. When Carlos first told them to turn around and let me have it, they weren't sure what to do. Oscar The Grouch, who was straddling his bike nearby, had to say, "He's serious."

But if anyone knows how to give The Finger, it's bicyclists, so next thing I knew, a new record had been set.

Several times this year, I've mentioned my friend Heather and heard someone reply, "Is that the chick who's always flippin' you off on your blog?"

Now I'm waiting to meet someone who says, "Hey, are you the guy I flipped off in Hope?"
Posted by Tim at 8:55 PM

Wow, there is a lot of love going on in that picture. I stand defeated!

The Soggy riders had you outnumbered, but your photo is still a fine piece of work, Jeff. I'd call it a tie.

Keep an eye out later this week for a great shot from our bike-riding brethren in Canada.