This is not what a can of bear spray should look like at the end of a ride. Muddy, yes, but it shouldn't be covered in snow. I'm probably in a very small minority of people already packing (spicy) heat on the Hillside, bu 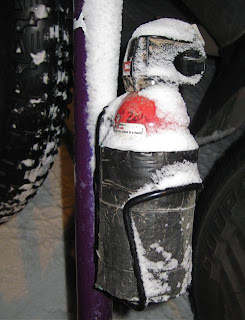 t with two bears spotted roaming the area a week or so ago, it seems silly to leave this stuff among all the debris on my workbench.

The bears have probably already crawled back in their dens and dozed off for a few more weeks after figuring out that snacks are still few and far between, but who knows?

I don't really mind the early risers, as long as they keep to themselves. I see them as harbingers of spring. If the seasons stay on track, we're only five or six weeks away from the first road-bike ride of the year.

Time to start thinking about new tires.
Posted by Tim at 8:08 PM

I think it was just Groundhog Day, Alaska style. They got up, wandered around checking for their shadows & went back to sleep.
Now, I forget, do we get an early spring or 6 more weeks of winter? ...Oh, same thing!

I would never survive in alaska. Never mind that my comfort bike couldn't handle the terrain - I don't do bears. Bear spray on a bike ride! You guys are tough up there.