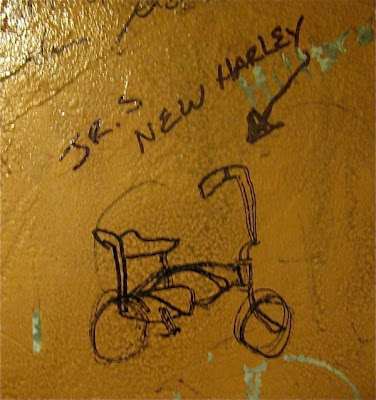 Artifact documented during a scientific
(post-ride) examination of the Long Branch Saloon.

Early humans used pieces of coal to decorate the walls of caves in which they slept, cooked and raised their offspring. Their drawings documented hunts, harvests, and migrations.

Modern humans not so far removed from their cave-dwelling ancestors use ink-filled pens to decorate the walls of rooms where they urinate. These primitive illustrations typically represent a fascination with genitalia, or present allegations of homoerotic exploits by heterosexual members of the same tribe.

On occasion, these displays of social interaction in the form of sophomoric teasing reveal unintended ironies. Unbeknownst to the primitive artist, maybe his drinking buddy Steve really does like guys; perhaps your mother really does like to ... well, nevermind.

And maybe J.R. would ride his way to a better future on a Stingray instead of a Harley.

Let’s hope so. Evolution is a beautiful thing.

I know JR! He only rides bikes so he can race motocross in the summer. Kind of sad actually.