After one of my recent posts, a comment was left to ask why so many of the pictures on this blog are of the women I ride with, instead of the men.

One reason is that the women tend to share my riding style. I’m happy to ride a steady pace, occasionally wait for the riders behind me, and chat a lot along the way. With most 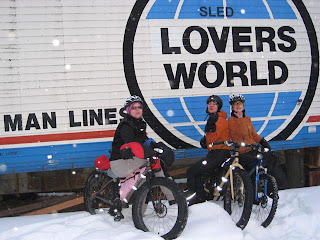 guys I ride with, there’s a much more businesslike approach—mount up, ride fast, cover lots of ground. So, when I ride in a mixed group, I tend to get more opportunities to shoot photos of the women while the guys (usually their husbands and boyfriends) hammer away up front.

I like the fact that most of my group rides include a mixture of men and women. Women are good for mountain biking, partially because they remind men not to take everything so damned seriously.

A few summers back, I was down on the Kenai Peninsula for a ride with two other guys. We were doing a loop from Primrose, down the highway to the Lost Lake trailhead, then up over the mountains back to the car. To knock off the 15 miles of pavement at the start, we verbally agreed to form a pace line and save energy. I don’t think any of us had spent much time riding together, but I was pretty sure they were both faster than me, so I just tried to hang with ’em. And I suffered.

A little while later as we stood at the trailhead, gulping water and trying to catch our breath before starting what was supposed to be the hard part of the ride, one of the other guys looked around and said, “What the fuck was that?”

I looked at him and replied, “You mean you guys don’t always ride that fast?” The ensuing conversation revealed that each guy thought the other two were pushing the pace during their turns at the front. So everyone shared the blame—even me, the least-fit guy in the group.

That’s when one guy uttered some of the wisest words in the history of mountain biking: “That’s why you should always bring a woman.” He went on to explain his reasoning. Women, he said, are never afraid to tell the guys to pull their heads out of their asses and slow the hell down.

Don’t get me wrong. Some of the fastest and toughest riders I've ever known were women. It’s not about ability. It’s about mindset.

I’ve ridden with plenty of groups in which it was the women who put me in the House of Pain but, more often than not, we men can count on the female riders to relax, savor the fun, and save us from our own stupidity.
Posted by Tim at 10:44 PM

Who are you trying to kid? You've practically got a Harem. H

I'm just in touch with my feminine side.

All the girls I ride with kick my butt.

So I was catching up on my work-related fucking off and read this post. About 4 typos in that last paragraph, a word or two missing... no biggie.

You're about a month late, Bev. Try to keep up and catch these things in a more timely fashion.