One of the great things about a trail ride is that even if you’re lacking motivation, you’ll rarely regret it if you push yourself off your ass and get out on your bike 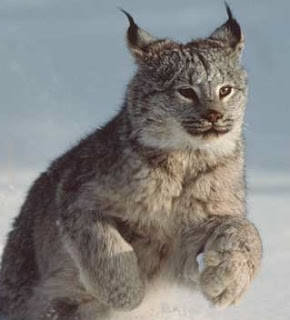 . Another great thing is that you never know when something truly incredible is going to happen.

Sunday wasn’t looking good. My wrist and thumb were aching from some mysterious injury. Minor muscle spasms were threatening to wreck my back if they got worse. I didn’t know of anyone headed out for a ride, and the trails were melting fast. Fortunately, Heather—yes, the one who’s always flipping me off—was ready for a ride while The Huber recovered from a day of that funny game in which people chase a little black disc all over a big sheet of ice.

It was a gloriously beautiful, sunny day. And then, as we rolled down Speedway singletrack, a big lynx calmly walked across the trail, right in front of me. This is a rare and thrilling thing.

I stopped to alert Heather as she rolled up from behind.

Then two more lynx (or lynxes, if you prefer) stepped out of the forest and onto the trail, following the first one through an area with plenty of snowshoe hare tracks dotting the snow. In the 13 years I’ve lived in Alaska, I’d seen a total of two lynx, and one of those was just a furry rump diving into the brush. Now I had three of them just a few yards away.

And then a fourth one stepped into view. It turned left and walked 10 or 15 feet on the trail right in front of us, then stepped off and followed its friends. We ditched our bikes and moved forward on foot, managing to get a couple of brief sightings as the foursome walked through spruce trees, making their way southward.

I don’t know what the odds are for for something like this, but I’d put them in the “damn unlikely” category. When she learned of this encounter, my friend Bev replied that during 31 years in Alaska, she’d never managed to spot a single lynx. And I’ve never heard of anyone seeing two or more at one time. I never even bothered to pull out my camera, because I thought each lynx I saw was going to be the last.

My wrist still hurts. The ride probably didn’t do it any good, but there's always ibuprofen.

It was worth the pain. Because I could have skipped that ride. And, chances are, I’ll spend the rest of my life in Alaska and never see something like that again.
Posted by Tim at 10:11 PM

Makes getting up and out in the morning all the more magical.

What an awesome experience! It reminds me of seeing my first wolf in the wild. I still get excited just thinking about it.

Wow! You captured exactly how I feel about dragging myself onto the trails even when my enthusiasm is lagging. "You never know what you're going to see".

I bet that was a mom with three almost grown-up cubs (kittens?). That's a super-mom to be able to raise such a large litter almost to full adulthood.

Remember today whenever you hesitate to go for a ride on the trails.

KB, according to the Alaska Fish & Game, kittens stay with their mothers until late winter, and then the families break up for mating season in late March and early April. So it's probable that we saw a family.

I've also heard that lynx have been seen hunting in groups this time of year, but I wonder of those sightings haven't been of family units, becasue I can't find any information on pack hunting.

wow! that would be so cool

Seems the best rides are the ones I have excuses not to do but go ride anyway. This one seems like the cream of that crop!

I know exactly what that's like. After living in Alaska for 44 years I've only seen lynx twice. Both of them in Kincaid. Both in the same year, once in the summer and once in the winter. I actually surprised it when I went by (it was on the coastal trail). The wind was blowing and it was 7:30am on weekday, so there was no activity in the park at all. When I rolled by it was only about 4 feet away. It scared the living beejeezus out of me. When you're that close they really look huge. Big adrenaline rush on that one.