Calm before the storm My nephew Ry wheelies down the railroad ramp
in Laramie, while his wife, Gretchen (below),
rides her beer-equipped townie.

After a week in Wyoming and Colorado, where I alternated between bustin’ a helmet and gasping for air at 8,000 feet, I’m home with just enough time to prepare for this weekend’s Fireweed 200 relay to Valdez.

Should be fun. The weather forecast is a good one, and my teammates tell me I’ve been selected to 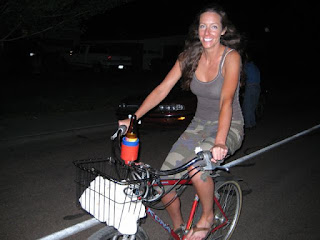 ride the descent down Thompson Pass—not because I’m an especially skilled descender, but because they want no part of rolling down a mountain at more than 50 mph. In other words, I’m considered expendable.

It’s as big an honor as being the FNG made to walk point in a combat zone. Yeah, I’m feelin’ the love.

I think you were chosen for the descent because the heavier you are the faster you descend. You look like the prime candidate.