Love the (new one) you're with

I was pedaling through downtown Steamboat this morning when I caught this bike out of the corner of my eye. It was stashed in a little side alley, and 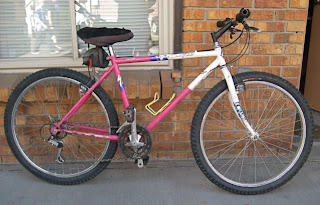 I recognized it instantly because it’s the same model as my first mountain bike: a 1989 Specialized Hard Rock Comp.

Because this battered old thing has most of its original components, seeing it was nostalgic. Mine had the same ugly colors, the same crappy triple setup (a cheap ripoff of Shimano’s Biopace rings), the same cantilever brakes, threaded headset and quill stem. It didn’t have a replaceable derailleur hanger, and the wheelset weighed a ton.

I took it home and stuck in the spare bedroom of the house we owned at the time. I’d poke my head in and admire the bike I thought was so cool and beautiful. For the time, it was a pretty decent entry-level bike, and riding it was the most fun I’d ever had on two wheels.

As I looked at this bike this morning, I briefly imagined what it would be like to ride on the same technology today.

Email ThisBlogThis!Share to TwitterShare to FacebookShare to Pinterest
Labels: Specialized

Ahhh! Some lucky soul is enjoying it!