My interest in GPS gizmos has come to an end. When I received this Garmin unit as a gift two or three years ago, it was a fun gadget. It put cool lines on a Google Earth map to show 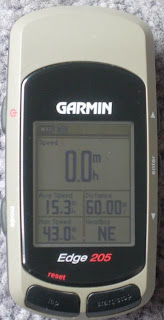 where I'd been. When I added a road bike to the mix, it allowed me to use one computer on two bikes, saving me some money in the process.

But that was about it. One advantage of Alaska's limited trail system is that a basic map does the job just fine. The Garmin was just a too-complicated way of tracking speed and mileage: Its battery always had to be charged, and every time I turned it on I had to wait a couple of minutes for it to start communicating with satellites.

Recently, the damned thing started turning itself off during rides. A firmware update helped, but only a little. It was still unreliable, and other Garmin owners told me they were experiencing the same problem.

So before today's trail ride, I pulled an old Cateye bike computer out of the pile of crap on my workbench, where it had been buried for two seasons during my flirtation with the high-tech toy. I mounted it on the bike, took it for a ride, and it performed flawlessly for five hours.

No muss, no fuss. Reliable as hell. I don't even have to turn it on—it wakes up when the wheel rolls. I'd already put a wireless Cateye on my road bike 10 days ago, and I love it.

Somewhere around here, I've got a box full of computer cables and other miscellaneous electronic junk. Soon as I find it, I'm throwing the Garmin in there, too.
Posted by Tim at 8:19 PM

Email ThisBlogThis!Share to TwitterShare to FacebookShare to Pinterest
Labels: Garmin