Fireweed: The Good and the Tragic 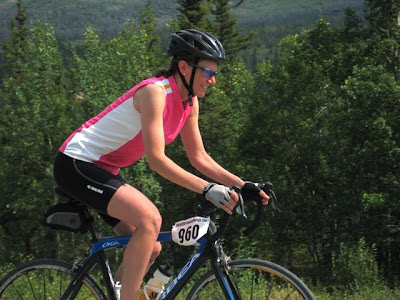 Team Muschi Schmerzen had a great day in this year’s Fireweed race. With all four members returning from last year’s race, we actually bothered to read the rules and give strategy some thought, so we shaved about half an hour off our previous time in the mixed four-person relay division of the 200-mile event, and placed 5th among 44 teams.

The weather was good, we had no serious mechanicals, and our driver—my wife, Jacque—always managed to get us to the next exchange on time while do 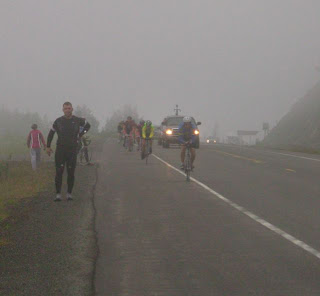 dging sluggish RVs and indecisive team drivers. My cool teammates even staggered their rides to set me up for the final stretch up to Thompson Pass, and the long descent down the other side. If it hadn’t been for that damned headwind, I might have been able to cook up some real downhill speed like Huber did last year.

Spending nearly 10 hours jumping in and out of a car, shuffling a rack full of bikes, and hammering through multiple five- to 10-mile relay legs has a way of creating all sorts of laughs, confusion and general mayhem I’ll remember all year. And that’s a very good thing. So thank you H, Monkee, Huber and Jacque.

Unfortunately, when I checked my voicemail after arriving in Valdez, we learned that the 100-mile race—which had started a few hours after we left Sheep Mountain Lodge—had been marred by a bad crash. Robert Johnson was descending from Eureka Summit when he fell, went under a guardrail and struck his head on a steel post. He was pr 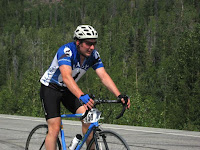 A friend who rode up on the scene said that several riders went down, so a number of things could have happened. News reports so far have been pretty thin, probably because organizers are referring all media questions to the state troopers, who don’t seem to know much. The rest of us are left to wonder what went wrong. From what I remember, that stretch of the course was among the better sections of pavement, so the troopers’ “no apparent reason” story doesn’t exactly sound like the result of a thorough investigation.

Given that it occurred on an open highway during the state’s highest-profile bike race, the cause should be determined. Hopefully, everyone involved will figure out what happened, and then openly share the information. Because maybe it’s just me, but right now, it feels like race organizers are covering their asses with silence, and troopers sound only marginally interested in why a cyclist died.

I never met Robert Johnson, but I think he deserves better.
Posted by Tim at 8:29 PM

He does deserve better, as do all of you out there that day.

The race organizers are not trying to cover anything up. You know sometimes you can't say anything when you just dont know. At this point how about we let the State Troopers complete their investigation. They have spoken with the riders who were in the group.

It is not respectuful of the riders, the organizers of Bobby Johnson to enter into erroneous speculation.

I understand that organizers don't know all the details -- and I appreciate their volunteer efforts to put on such a fun event -- but there hasn't even been a public statement acknowledging the death or expressing sympathy for the Johnson family.

A brief statement would be an appropriate gesture. The public is capable of understanding that this is a volunteer-run race, but it's also a big, organized event. Simply referring everything to the troopers is bad PR.

Again, you speak with out all the facts.

Obviously your were not at the Bear's Tooth for the awards last night, where momenet of silence was held and statements made and a public expression of sorrow and sympathy, in addition to words relayed from Bobby's wife.

The race organizers refered questions to the Troopers becuase it is a normal part of an on going investigation. The spreading of rumors that several riders went down is not accurate and serves no purpose. We do know that Bobby was the only person in that group to crash, beyond that the race organizers have been told nothing more. The race organizers can not comment further becuase the troopers have not released their report, and for them to say anything at this point would only do as you have done, specualting and spreading rumors, not facts.

To say you "feel like" the race organizers are covering their asses is an inflamatory statement. It serves no purpose to make a statement when no one knows what caused Bobby's crash. I suppose you would prefer that the race organizers conduct themselves like a blogger and throw out feeling and rumors as fact.

Perhaps we will learn what happened perhaps not. It could be that the only person who really knows is Bobby.

No, I wasn’t at the Bear Tooth last night, so I have the same perspective of much of the public: I know only what I’ve heard through the grapevine — or, in my case — a friend who saw the scene after the crash. If no other riders fell, I’ll stand corrected when more information is available. For now, I know only what I’ve been told through unofficial sources, and that was clear in my blog post.

I’m not speculating on a cause, only expressing my frustration with the lack of information. When the troopers say tell the media that a guy apparently went over the handlebar “for no apparent reason,” and that he was wearing a “lightweight bicycle helmet,” it doesn’t inspire a feeling of confidence that the responding trooper was familiar with bicycle accidents.

As for the Fireweed organizers, I’m just saying it’s unfortunate that there was no simple statement on the website or to the media saying something like, “This is a terrible tragedy and our thoughts are with Mr. Johnson’s family while we await the completion of the Alaska State Troopers’ investigation of the crash.”

That’s basic PR. It helps diffuse rumors and keeps pain-in-the-ass bloggers like me from asking for more.

I mean no offense to the volunteers, especially all the rank-and-file people who work their asses off on this event every year. I’ve been in their shoes a few times at other events, but more often have benefited from the selfless work of such people.

In my line of work I often come across tragic cases. Often times there is a clear explanation (think motorcycle, a young man and beer). But sometimes there isn't an explanation. A single rolled car is found in the ditch. A person is found in their home after a fall with a severe head injury. Sometimes, even with witnesses the cause of a tragedy remains elusive. Hopefully time will clarify what happened.

We'll all try to be patient with the details. Meanwhile, I agree that there should be a note of condolence on the Fireweed website. If if was my loved one, I'd appreciate that people were thinking of him and finding out how they could memorialize him.

My heart goes out to Mr Johnson's family and everyone who witnessed the accident and offered help.

In my haste writting in this little window I see a major typo that may no be clear.

I should have check it closer.

It is not respectuful of the riders, the organizers, or to Bobby Johnson to enter into erroneous speculation.