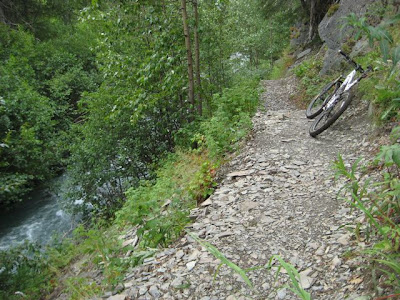 Lower portion of Crescent Lake Trail.
I was doing a rare solo ride on the Kenai Peninsula a couple of weeks ago when I crossed a little stream flowing over Crescent Lake Trail, then chose a bad line and planted the front wheel against a boulder.

I should have immediately unclipped but, as usual, I held for a couple of seconds to the hope of someho

w getting over the rock. Predictably, I fell to the left and landed in a bunch of damp vegetation. With my head downhill and my legs still around my bike, I started the awkward process of trying to get up.

The spongy ground gave way when I pushed on it for leverage. The bike wouldn't budge because the pedal and handlebar were tangled in the thick stalks I still wasn't recognizing. Just as I started to wonder how in the hell I was going to get up, the burning started in my left leg and arm. Instantly, not getting up ceased to be an option. Whatever it was going to take, I wanted the hell out of there.

It was that Alaska summer ritual: A nasty encounter with cow parsnip. Call it pushki, hogweed, or whatever else you like, it's the Weed from Hell. It's juices contain a phototoxin that reacts with ultraviolet light and causes painful, blistering sores that can keep flaring up for weeks whenever your skin is exposed to the sun.

I thrashed my way back onto the trail and hurried to the tiny stream, where I splashed my legs and arms with as much fresh water as I could scoop up. Not that it did any good. The juices were already working their way into my skin. For the next few hours, my left leg—which took the brunt of the crash into the weeds—felt like it was plugged into a wall socket. A thorough wash when I got back to camp helped, and a tube of Cortizone cream kept most of the pain at bay for the next few days.

They say that American Indians used to have many uses for cow parsnip. They'd eat it, make dye from the roots, and turn the blooms into a mosquito repellent.

Personally, the only use I have for this crap is to keep a weed-wacker busy.
Posted by Tim at 9:13 PM