A local rider recently posted a forum link to this story on Chris Boardman’s idea of what bicycles will look like someday. But after 20 years riding mountain bikes, I've 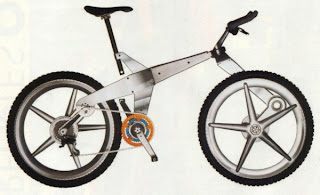 stopped paying much attention to "concept" bikes and the designers who claim to see the future.

Remember Alex Pong and his radical-but-doomed design for Cannondale 10 or 15 years ago? That bike (shown here) actually got on the cover of a couple of major magazines, and Pong told interviewers that it was on the verge of going into mass production.

Instead, it went nowhere. I think it disappeared like Jimmy Hoffa the day they rolled the prototype through the back door and slipped out of town after Interbike.

There's a good reason the bicycle has gone pretty much unchanged for 100 years, other than a few modifications to accommodate suspension: The fundamental design of a modern bicycle is so simple, functional and strong that it’s damn hard for anyone to improve on it. You might as well try redesigning the opposable thumb.

I understand that someone has to push the boundaries and dream up ideas. That’s where innovation comes from. And I don’t know how bikes will be built in another 20 or 30 years, but I’d be willing to bet most of the changes will be in materials and components.

The bikes themselves? They’ll probably look about like the ones we ride now.
Posted by Tim at 3:33 PM

Did you really just write, "..redesigning the opposable thumb"? That would suggest that the thumb was designed in the first place. Are we pushing Darwin out of the picture? Have you embraced intelligent design? If so, I have some books I would like to lend you.

Don't worry, I have a copy of Dawkins' book, too, and I'm as atheist as I ever was.

I think you're reading too much into my phrasing. What else would have worked? "Re-engineering the opposable thumb?" Nah. "Re-evolving the ..." Nope.

I think your right, Fuck this inovating designers who want to make us pedal less and ride more, as if, we were trying to reach the Stratosphere on our bikes. I just bought a 20 dollar 1976 Azuki in a junk yard and made it it a fixed gear...