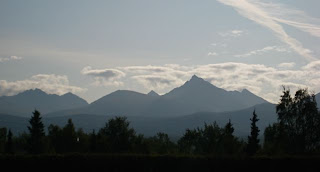 The target. Saturday's early morning view as the ride began.
Like most mountain bikers, I drive to trailheads more often than I pedal to them. So on Saturday, I decided to start my ride from home instead of a parking lot. The added bonus was that our group was riding over Powerline Pass, which meant I could look at the Chugach Range as I pedaled away from my house, and have the satisfaction of knowing I would be riding all the way over the horizon on the east side of town. 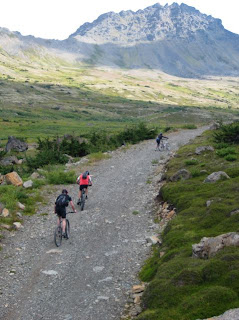 Sean and Chris head toward the pass as they
close in on a woman
who wasn't feeling gravity's love.
Think about that. To look at a mountain and know you’re going to ride up and over it—all of it—without driving up through the foothills or to some high-elevation trailhead. Riding across town, aiming uphill, then pedaling until you can drop down the other side and return to sea level somewhere else. No lifts, no cars. Just your legs and a grudge against gravity. Most of us should try it more often. 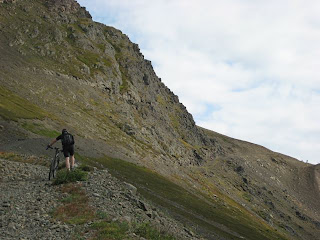 Sean pushes his singlespeed Karate Monkey
up the final approach to the pass.
It’s a nice way to remember that mountain bikes were made for riding up mountains, despite whatever you may hear from those lazy-ass downhillers. 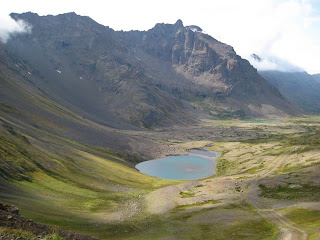 The reward for a big climb: beauty
There’s no better way to earn your post-ride beer. 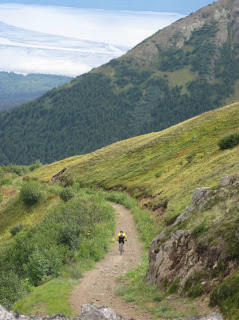 Sean heads down the back side.
Down there by the sea, cold beer waits.
Posted by Tim at 10:58 PM

Email ThisBlogThis!Share to TwitterShare to FacebookShare to Pinterest
Labels: Powerline

So, did you turn around and pedal back home?

what am i missing here? people take their bikes out for a drive on the roof of their motorholic vehicles?
why?
i thought frigid bits was a "run what you brung" event.
/me does not want to know how rover gets exercised

so why did it take 12 hours? we are dying to know!

that woman chris and i were catching on the climb was more hardcore than any of us. kickstand, step through frame. looked like her first mtb ride ever.