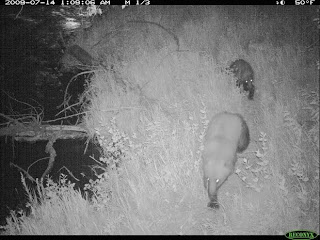 s live in the woods. Therefore, it's a bad idea to build a greenbelt trail there, they say, because if you put a trail where bears live, animals and humans might happen to encounter each other. (Although they also said the bears carefully avoided times and places where humans were active.)

Anchorage mountain bikers have been encountering this same argument for months now. People who don't want new trails near the homes they built in bear habitat have suddenly become very "concerned about safety," so they lobby against building trails in bear habitat—especially when it's on the public land that serves as a really sweet extension to their backyards.

The problem is, all open, wooded land around here is bear habitat. Anchorage itself—the largest city in Alaska—is bear habitat. That would seem to limit the options, wouldn't it?

But the thing is, no one appears to be prohibited from building subdivisions or discount stores in bear habitat.

Doesn't it seem a little weird that it's OK to bulldoze bear habitat, but it's not OK to visit it?
Posted by Tim at 12:36 PM

Un-bear-able. By that logic, I should immediately cease and desist all hiking activity as well, as it is most certainly a trespass against the sanctity of a bear's privacy.

I would venture that it is yet another example of the Dunning-Kruger effect at work.

Around here, huge tracts of open space are being closed to all humans because of the presence of black bears, lions, and other 'species of concern' (but those very same animals can be shot during hunting season). I'm very much a wildlife advocate but I also see that these animals are flourishing among us. They're as numerous in forest areas where humans go as where they don't. So, I think that the logic sucks.

It sounds somewhat similar to what you're facing.

Now that is "f"ing hilarious. One of your best posts yet.
I always thought that "Alaskans" were open to encounters with wildlife whether it be hiking, biking, or whatever.
Let's build more parking lots but heaven forbid we disturb those damn bears.

Not destroying habitat is simply un-American as it fails to demonstrate that we are the masters of the universe. Sharing the planet with the wildlife is a sign of weakness that should be avoided at all costs. Mount a gun rack on your bike and they will welcome you...

So is this residual backlash from the attacks last summer or just rampant stupidity?

Wheel, I think some of it is an overreaction to last summer's incidents, and some of it is opportunists using those incidents to further their personal agendas.

Last year a brown bear was hit by a car on the Glenn Hwy, near the Sullivan Arena. I think the safest thing would be to close the Glenn Highway during the salmon run.

I just discovered your blog.

I quite often include photos in my Wasilla (and much more) blog that I take while I am out riding my bike.

Please come and visit sometimes. I will put a link to your blog on mine and it would be wonderful if you could do the same for me.

Isn't it refreshing that all those homeowners are concerned for mountain bikers' safety!

so, what you're saying is that we need to promote mtb trails as housing developments or malls? i wouldn't mind living in a singletrack-side housing community....

I think, in this particular circumstance, the issue is that the people who live there are already freaking out about the bear encounters they have in their backyards, and want to ignore the fact that the trail will result in more encounters. The land is limited by geographical features, so the trail will be taking away some of the area they currently use to avoid humans. Maybe more people will be hurt, but certainly more bears will be killed to make the people feel safer.

I'm not sure if it's the Dunning Kruger effect so much as the fact that we are so over-lawyered you can't sneeze without being sued anymore. I'm sure some bozo who ran afoul of a bear would find some way to sue the city for perceived negligence.

Also, it is probably a property value issue as well, with higher property values for those off of the trail system because there is less trash, vagrants, etc. In today's falling real estate market, it may be playing a role.

Alaska is a big state. Some eco-fascists think animal rights should always supercede human ones, but I personally think that the geographically limited Anchorage bowl is where humans live, and the bears pretty much can go anywhere else in the state they wish. Just like bears, we need to have space too, and the MtB trails have to be built somewhere, so it might as well be near where we humans live.

As long as they are good neighbors we don't have to worry about animal control measures. Many bears who venture close to the city are opportunists and probably should be relocated or culled if they can't be reformed.