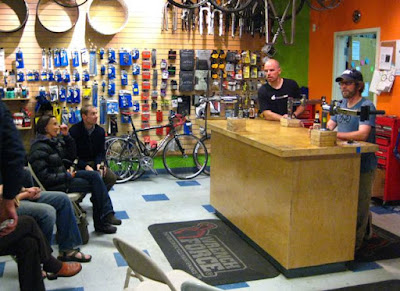 Carl Battreall, right, introduces "Fat Bike" at Chain Reaction.
Carl Battreall’s documentary Fat Bike is finally finished, and a small crowd was lucky enough to see it at a private screening tonight. It is, without a doubt, the finest documentary on Alaska winter mountain biking ever made.

But seriously, it’s a very nicely done piece of work from a talented photographer moving into the realm of video. With Carl’s eye for imagery and sharp editing, and a fine soundtrack from local singer and songwriter Melissa Mitchell, it’s the kind of project I’m proud to see coming out of Alaska.

Fat Bike is already a finalist for the Boston Bike Film Festival coming up next month, and is being submitted to several other festivals across North America, including the International Bike Film Festival. It deserves to do well even if, as Carl said, part of the appeal will be for people to think Alaska winter riders are crazy.

The film, which was held to 26 minutes in length to have a chance on the festival circuit, touches on the history and evolution of fat bikes, and the passion and commitment behind winter riding.

Fat Bike will be available for download from Amazon.com in the next few weeks. Check it out. Trust me, it’ll be affordably priced. And for local riders eager to see it in a crowd, hang in there. A public screening now would disqualify the documentary from the Anchorage International Film Festival in December, so you’ll have to be patient. If it is screened during the festival—and it better be, in my opinion—Carl hopes winter riders will pedal to the screening en masse.

Awesome! My bike should be ready by then!

Damm you Woody ! Now you got me hoping for snow already !

Nice posting Rev. One question. Do you know which festivals Carl might be entering his film? If any are within a days drive I would definitely be inclined to attend.