This was supposed to be one of my infamous rant posts. I was composing all the poison prose in my mind as I photographed this bandit trail project tonight. It is (or was) an effort to build a berm for a banked ride through a gentle turn on Queen Bee. But in reality, it was just a dam that would have created a mud bog. The unauthorized project understandably has people upset—the people who spent years making this trail a reality. 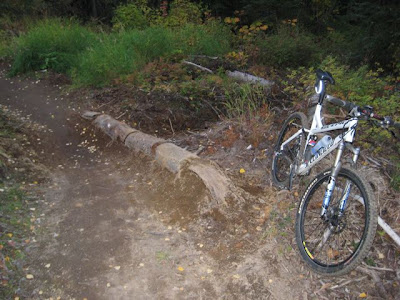 After I took this photo, I shredded the whole thing. Rolled those four-foot logs into the weeds, chucked the rotten end ramps as far as I could throw them, and kicked away dirt to restore drainage into the downhill channel. Then I moved down the trail a short distance to photograph the next modified corner.

That’s when I heard a rider coming down the hill. And heard him ride by his shredded project and loudly yell “FUCK!” A minute later, we got to have a chat.

It turns out, he was just a young guy with time on his hands, and a desire to “improve” the trail by making it faster and more fun. He didn’t mean to dump on the efforts of others. He didn’t have any idea how much work went into building this new trail network. He didn’t know how unsustainable his work was—rotten logs make a pitiful base for a banked turn. He didn’t realize he was building dams that ruined drainage from professionally designed trails. But that's what he did.

He didn’t know that his hours of work were doomed to be dismantled by volunteers later this month if he doesn’t remove his damaging modifications. He does now.

By the end of the conversation, I had a hard time being mad at the guy. He meant well, but he didn’t have a clue about how to build or properly modify trails.

Most young guys like him don’t read the blogs of old guys like me, so this message may be futile, but if anyone who reads this happens to be the kind of person who wants to do a little freelance trail work, please, don’t.

I truly admire your thoughtfulness and patience with that young man.

Good thing you had already unleashed your rage by tearing apart the berm! I mostly save my ranting for home... or the steering committee meetings.

I always figure that when I'm telling people about the STA trails I'm representing our group and it's a chance to educate. Saying "we did this because..." shows them that trails don't just happen but that other riders gave considerable thought to planning them. So, thanks for representing.

We've had a learning phase too. Everyone wanted to "help". One guy removed a whole bunch of rocks to make the trail smoother, but it left a whole bunch of craters! Since then, we've organized better. Instead of getting in trouble, they're invited to join the next trail crew outing. They get to feel part of the process, and also learn the correct way at the same time.

We find here in KC that those types of people can often be turned into reliable trail volunteers with a little education. Sounds like you handled it perfectly. Surprisingly.