Two ways are better than one

The new Singletrack Advocates trail network is tight, twisty, fun as hell, and allows riders to choose a variety of trail combinations to complete t 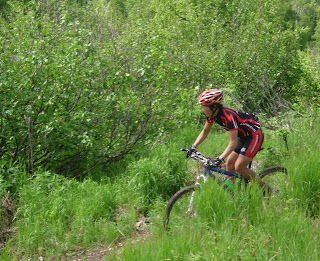 he “Grand Tour” of the network. But not everyone can easily comprehend the trail design, which was intended to use vegetation, sharp turns and uneven terrain to make riders slow down and ride with some skill instead of just balls-to-the-wall speed.

All the low-visibility corners have prompted grumbling from some riders that the trails should be one-way routes for improved safety. The way I see it, one-way trails might cut the risk of collisions, but they would also cut everyone’s options in half.

This situation reminds me of when I once worked for a big company with no limit on employee sick days. A tiny group of people abused this benefit, calling in sick at least once during every two week pay period—in other words, they were screwing The Man out of an extra month every year. When the bosses told everyone to be more careful about the use of sick time, it was the abusers who panicked and demanded to be told exactly how much sick time they were supposed to use.

In a rare moment of brilliant clarity for a corporate drone, The Big Cheese looked at these people in an open meeting and said, “You have the luxury of unlimited sick time. Do you really want me to restrict that to a firm number?”

It’s the same way with trails. Do you really want to sacrifice half of your options and ride only one way? Wouldn’t it be more fun if everyone used their heads and kept riding both ways?

Unfortunately, some mountain bikers are abusers of privilege. It’s just too tempting for them to bomb down trails while barely in control, or with their loose, out-of-control dogs running along. A careless rider and his dog nearly hit me last Wednesday night, and plenty of folks have had similar experiences.

I don’t mind rules, but I hate restrictive laws forced by the inability of people to handle loose ones. So, instead of imposing new rules to solve a simple problem, I offer this easy solution: Let’s all slow down, be safe and keep our two-way options open.

Ride under control. Watch for your fellow riders. Call out to approaching riders, or ring a bell so everyone can keep track of each other. Leave your dog at home, or take him to a wider trail with plenty of room and better sight lines. It’s safer, more respectful of other trail users, and just might save you an expensive vet bill.

And for cryin’ out loud, stop skidding into turns. That just shows bad manners and poor riding skills.
Posted by Tim at 8:29 PM

We have a trail that is becoming more popular, so we've been looking for ways to keep it safe for riding both directions. We've used techniques such as trimming back foliage in blind corners, and adding technical challenges like stair steps to slow people down or prevent skidding. It's way too fun to ride both ways!

the best way to deal with out of control riders:

in this example, the more responsible rider is wearing the long black tights, and the speed-before-safety rider is in the pink hotpants. safe for work if you turn the volume waaaay down.

Almost all our trails are one-way but there are enough of them with enough options that it's not been a problem. I think living in a metropolis with millions other folks may be why we both have ample trails and the need for some restrictions.

I totally agree with you about having choices rather than suffering under policies that are really only needed by a small number of folks who never learned self-control and personal responsibility. I worked for a company where one person spent too much time reading the newspaper. Rather than talk to that person they just cancelled the paper, screwing the rest of us out of the option for a quick read on break.

Right on Man, Right on.

just about all our trails are one way here except on those rare race days when you can get round them the opposite way. true, for most of them, during the week they're so unbusy you could cycle them any way you like, it's just that they're designed ot be cycled one way.

we're lucky enough to have good combos of fast bits and skills bits that you can pick and choose dependent on daftness and/or skill level. no dogs tho. not ever. the odd pedestrian is bad enough but dogs!

agree totally about skidding into corners. aside from looking bad it chews up the track and leaves those awful braking bumps

It actually takes more skill to manage corners without skidding. It also lends to a more smooth floating slalom like experience.

Workers and Leave - When I was working we had a system that was a combo sick/annual leave. Those that abused the system ultimately were restricted in fine detail, i.e. late from lunch fill out a leave slip for 15 minutes. Petty, but it got the abusers in line. I wasn't an abuser so I got to take 2-3 hour lunches to go on bike rides, because my supervisor knew I was going to put in more than my 40 hours per week and not ask for any compensation.