The old footbridge over Campbell Creek on the Blue Dot trail could be described—if one were feeling generous—as sketchy. 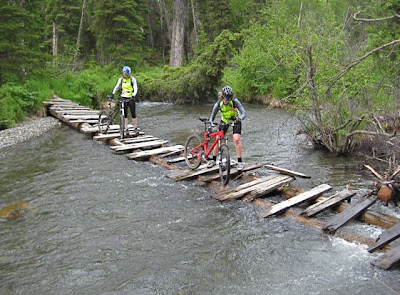 It’s a rickety, collapsing wooden structure that’s in such bad shape it’s actually less slippery when it’s covered in ice and snow, because water and moss make it a real bitch to cross while wearing hard-sole cycling shoes in summer. When I posted this picture a couple of summers ago, it was, uh ... suggested that perhaps I should have been offering Maura and Heather a hand instead of snapping pics as they risked a cold bath. 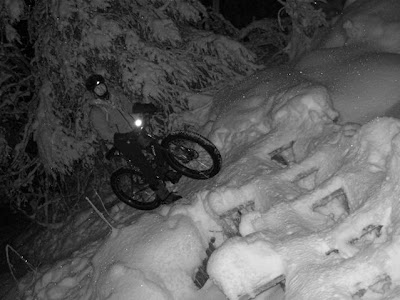 And when Jules and I rode Blue Dot on Wednesday night, and I briefly forgot that it was her first time on the trail, it occurred to me to say, “Watch out for the bridge” just as she was about to roll onto it. She stopped right where you see her; next to a wheel-grabbing hole mostly hidden by darkness.

She immediately suspected, of course, that I was waiting with my camera to catch a gnarly crash photo.

I think my reputation among my riding partners might need a little polishing. I would never hurt one intentionally. After all, friends who will hit the trails in freezing fog at -2F don't grow on trees, you know.

Besides, I can always hide in bushes and get nasty crash shots when strangers ride by. And now that Julie mentioned it, that would be a pretty cool shot ...
Posted by Tim at 8:41 PM

Pure evil. But hysterically funny, all at once.

Looks like it might be time for a trail maintenance party which just might be easier in the winter. Unless, of course, you are waiting to capture the perfect crash shot before making any changes...

But if we put in a new bridge, it will have to be up to certain standards... Of course it will probably take over a year of studying because it's fish habitat, etc.

I'll admit I did have to turn around this fall when it was glazed with ice and I couldn't figure out how to crawl and drag my bike across it. Much better when covered with snow!