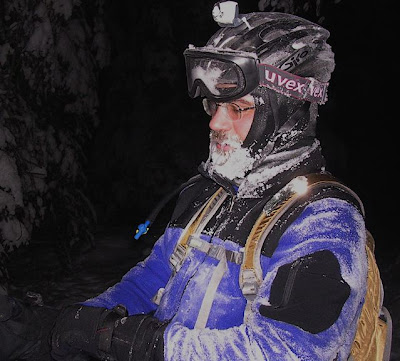 It’s January in Alaska, which means that 1.) it’s colder than a well-digger’s ass, and 2.) the temperature’s about to drop. Any day now, we’ll hit another one of those -20F spells that are good only because when the temperature rises 40 degrees, we all feel great at 20 above zero. 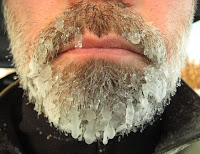 That shot at the top of this post was taken by my friend Steve a couple of winters ago on one of those sub-zero nights that can make you momentarily wonder if the couch potatoes have a point when they call us nuts. My face got so iced up that night, I had trouble sticking food in my mouth. Hell, I had to find a gap just to get a drinking tube in there.

Riding in air that cold can hurt. There’s brain freeze to deal with, and your eyes water like crazy if the wind hits them. Exposed skin gets so cold it can feel like it’s burning.

Some people would think the last thing you need on top of all that is a mass of ice hanging off your face, right? But I don’t mind it, partially because I get a kick out of the weird looks it brings from other people on the trail.

But mainly, I don't mind it because it's a small price to pay for not being a slave to razors in the morning, or TV on cold nights.
Posted by Tim at 7:26 PM

We've been in the deep-freeze for about 4 days with another 7 days forcast for -0 temps. It'll be -27 by the time I start my pedal towards work in the a.m. That's warmer than Sunday mornings -35!! Sad when I think that's warmer!!! ;)

I had the grizzly Adams beard going before the holidays, but the better 1\2 asked me to shave, so I gotta start all over again!!! LOL

Go to Urbandictionary.com. Search "facial." Remember this next time you make fun of a tea bagger

You perverted Grouch. I was referring to the traditional use of "facial" as a beauty treatment for the face, and you had to go and dirty it all up!

Besides, my Google hits are gonna soar, sucka!

I got back from my ride yesterday and had to wait a while to get my balaclava off as it was frozen solid to my beard. Ditto on the razors and TV.