A bargain at twice the price

I saw a post in an online forum today from a guy who wants to calculate how long it will take for his new bike to “pay for itself.” He’s measuring the distances of all his errands and trips as a way of figuring out how much m 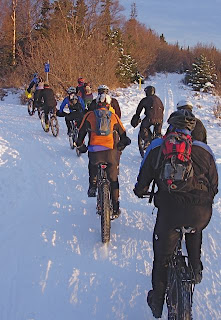 oney he saves by riding instead of driving, and when those savings will equal the cost of his bike.

On one hand, that’s a pretty cool idea. You've gotta love seeing someone get excited about his bike’s utilitarian value. Parking your car so you can pedal a bike is a beautiful act.

On the other hand, measuring a bicycle's worth in dollars and cents would—for me, anyway—detract from the beautiful act of just riding the thing. I know I’m saving money when I ride to work or the grocery store, and that’s part of why I do it. But only a small part.

As soon as you start talking about quantifying all the benefits of riding bicycles, you’re on a slippery slope toward measuring carbon footprints, calculating insurance and vehicle-maintenance costs, fuel prices, yadda, yadda, yadda. Next thing you know, you’re creating spreadsheets and printing pie charts—the kind of stuff that many of us like to escape by riding bikes.

I’m probably just lazy. I’m glad there are people who want to figure that stuff out and provide stronger arguments for bike commuting. But I’m not gonna do it. The older I get, the more I'm content to simply measure my rides in smiles, stories, scars and post-ride beers.

Hey, I’m a bike geek, too. I can stand around for hours talking about my bikes and how much they cost.

But what they're worth isn’t printed on any receipt.
Posted by Tim at 6:57 PM

For a resounding chorus of seconds to your sentiment, check the comments on this thread: http://tinyurl.com/35zjak
Calculating is just plain silly. Riding rules. Val

Me being 44 years young, i get a complete thrill knowing i will be commuting to work every moring!sometimes i even get that butterfly feeling!i have missed only one day so far this year.i truly believe if gas went down to a dollar it still would not matter to me,i'am just going to ride!

My former neighbor was a bike geek (~ 10 bikes in his garage) and he said that once he's ridden one mile for every dollar he spent on the bike, that the bike is fully depreciated and it's time to buy another one. My newest bike has twice as many miles as it cost, so I'm already a bike behind. Time to go shopping!

yah, your totally right on that way, and seriously spread sheets suck. haha and any of the money i save ridding to work on my bike, i probably end up spending on more cool bike crap anyways, and thats the way I like it. I ride to work because ridding is the best part of the day, everything ells is just a bonous

I spend most of my day calculating stuff. Getting on the bike is my escape from that. Exercise, environment, less cars on the road...all that stuff is great, but the primary reason I ride is because it's fun. All that other stuff is just a wonderful byproduct!

This post got me thinking of a previous quote you made that has stuck with me, "getting to work on a bike feels like doing the right thing and cheating the system all at the same time." I do think about these two aspects often when I ride. Especially the cheating the system part!