One afternoon in late August a few years ago, when I was in the best shape of the season, I felt a painless popping sensation in my abdomen. A little Internet research sent me racing to a doctor, because it didn 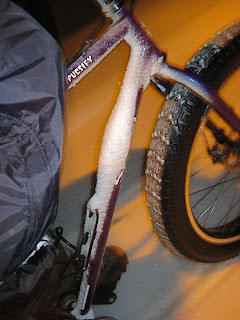 't take a brain surgeon to figure out I had developed a hernia. Turns out, I had three hernias.

Why was I in such a hurry? I had a trip to Moab coming up in eight weeks, and it takes six weeks to recover from hernia surgery. I threw myself onto an operating table, looked at my gut cutter and said, "Take me, I'm yours. And make it snappy, big fella." Next thing I knew, I had a belly full of staples and a new understanding of pain. About three days after leaving the hospital, my wife forced me into the car and took me to Potter Marsh to walk and loosen up. I held onto the wooden railing along the boardwalk as I shuffled along in short steps like an old man.

One week I was rippin' down trails and feelin' fit, the next week I could barely move. It was a shockingly abrupt transition. I felt like I'd been mugged (and then handed a large bill). My point is, this kinda shit happens quickly.

That's sort of how things have been for the past five or six days. It's been a great winter for riding, and I'm in better shape than usual for February. But since last Wednesday night some damned virus, a critter too small to even see, has been kicking my ass so hard that walking up a flight of stairs leaves me as gassed as pedaling up a hill. The closest I've gotten to a bike was when I had a brief window of energy Sunday night and finally made a couple of derailleur adjustments on my Pugsley before stashing it away again.

I've often heard people say we should "count our blessings." That's always sounded a little corny and I never liked the religious connotation, but point taken.

Occasionally, I'll remember to be happy that I'm having an illness-free, injury-free day. And I especially like to savor those days when my bike is running smoothly and silently, performing like a perfectly tuned machine. Those days are sweet.

When I finally get on a bike again, I'm going to gasp and cough as I clear the crud from my lungs and try to get back in shape. But I'm going to make a point of enjoying the fact that I'm on a bike at all.

Because germs lurk everywhere. And they're out to get us, the little buggers.

Email ThisBlogThis!Share to TwitterShare to FacebookShare to Pinterest
Labels: sick

I hope the virus moves on quickly. Tea and soup - that's about all there is for anything.

I'm another cyclist/hernia-sufferer. I just wondered if you found/heard of any connection between your riding and your hernia? My doctors have rarely, if ever, acknowledged any possible connection between the two, perhaps because I don't think they have any concept of what aggressive positions and riding are actually like. Data aggregation on this subject has to start somewhere...

No one ever attempted to connect my hernias to cycling. My surgeon said it was just a structural failure of the abdominal wall -- he said he sees the same thing in everyone from couch potatoes to body builders.

When mountain biking, I tend to ride in a more aggressive position than most of my friends, who have adapted to the more upright style that's so popular these days. Still, I've never felt like my position on the bike caused any additional stress on my abdomen.

My surgery was seven or eight years ago, and I haven't made any adjustments in my riding style or position, and I've had no problems with subsequent hernias (so far).